Fiat Lux.3 Architectures of Light was created by Arola in collaboration with Simon within the Cultural Centre of Villa Fernán-Gómez using a smoke machine, lasers and objects including a small tree to create "non-existent spaces".

"Fiat Lux is an ongoing project, an immersive proposal to awaken the sense and consciousness, with the desire to make the visitor feel part of an illusion," said Arola.

"Architecture is created from light. Light as a building material. Non-existent spaces appear out of nowhere, mutate, mix, cut, dialogue and fade away."

The exhibition hall was filled with smoke at timed intervals with a number of lasers positioned on lighting stands used to create two-dimensional planes of light that slice through the smoke.

These two-dimensional planes formed walls of light, which the designer describes as construction elements that change and move as it is interrupted by objects and passing visitors. 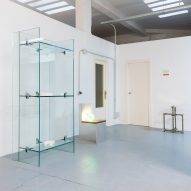 "The function is a free journey through space both to contemplate the scenes and to actively interact with the physical elements and volumes that appear and disappear," said Arola.

"This set-up is designed to invoke unique sensations and emotions in each visitor and showcase light as a creative element with a great ability to transform," added Simon.

A tree forms a focal point for the exhibition and is fitted to a motorised base that slowly spins and rotates. Lasers were positioned facing the tree and pan side-to-side to create piercing strips of light as the planes come into contact with the tree's rotating branches.

Wooden panels suspended from the ceiling and the equipment stands also interrupt the light paths to create openings within the spaces.

A soundscape by Mans O was paired with the light installation to provide visitors with an immersive experience.

The installation forms part of an ongoing project with Arola and Simon that evolves and adapts to different spaces as it moves location. It was previously shown at Catalonia's Lluèrnia festival in 2021.

At the 2019 edition of Madrid Design Festival, Jorge Penadés tasked 14 international designers with creating objects no larger than a shoebox and Barcelona-based designer Guillermo Santomà installed a series of sculptural structures inside a baroque-style mansion.

Fiat Lux.3 Architectures of Light is on display at the Cultural Centre of Villa Fernán-Gómez as part of Madrid Design Festival, which takes place from 15 February to 13 March 2022. See Dezeen Events Guide for all the latest architecture and design events taking place around the world.