Images have been revealed of a glass lift designed by architecture studio WilkinsonEyre that will give visitors 360-degree views of London from the top of a Battersea Power Station chimney.

Set to open in September, the Battersea Power Station Chimney Lift attraction forms part of WilkinsonEyre's redevelopment of the Giles Gilbert Scott-designed power station on the banks of the River Thames.

Currently undergoing testing, the glass elevator will rise through the interior of the power station's northwest chimney as part of a visitor attraction being built inside the Grade-II*listed building.

The 15-square-metre lift, which will have a capacity of 30, will offer visitors 360-degree views of London from the top of the chimney, 109 metres above the ground.

"Architecturally it's a fantastic journey through the 50 meter-high chimney to end up elevated more than 100 metres above ground altogether," said WilkinsonEyre director Sebastien Ricard.

"This is going to be a real experience – emerging to breath-taking, unobstructed 360-degree views across London, the river and the rest of the Power Station below," he told Dezeen.

Built within the 51-metre-high chimney, which was rebuilt using 680 tonnes of hand-poured concrete as part of the redevelopment of the power station, the lift was developed with manufacturer Otis to allow visitors to view the chimney up close.

"The design of the enclosure with its glass walls is of course bespoke and the detailing is superb," said Ricard.

"It's one of my favourite parts of the whole scheme and a brilliant way to bring everyone up close and intimate with the world's most famous chimneys!" 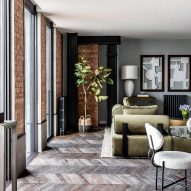 To allow unobscured views, WilkinsonEyre and Otis designed the lift so that all the operating mechanics are under the platform.

"The first challenge was integrating the circular lift car into a gently tapering shaft, as the chimneys aren't straight," said Ricard.

"And secondly, there could be no conventional suspension cabling as this would compromise the concept of uninterrupted upward and outward views," he continued.

"We worked with Otis to integrate all the propulsion mechanisms underneath the car to achieve an effect of uncluttered transparency when the lift reaches the top."

Built in the 1930s, Battersea Power Station was decommissioned in 1983. It is currently being redeveloped into a complex of offices, shops, apartments and a hotel that will sit at the centre of a masterplan designed by Rafael Viñoly.

The 17-hectare estate will include a housing designed by Ian Simpson Architects, dRMM, Gehry Partners and Foster + Partners as well as a square designed by BIG.