A series of stations has been completed at outdoor locations across Seoul and Gyeonggi-do – both densely populated metropolitan areas in South Korea.

The architecture office also placed interior versions of the EVCs in Genesis' flagship showroom. All of the models are designed to be replicated to create additional EVCs in the future.

Morphosis took cues from Genesis' distinctive logo – a winged emblem with a shield at its centre – for the design of the exterior EVCs.

Created as "protective canopies", the wings are made with a steel superstructure and aluminium panels.

Each canopy edge is fitted with continuous LED lighting, added to make the EVCs identifiable from far away after dark.

Morphosis also plans to have LEDs with changing colours to indicate a plugged-in vehicle's charging level. 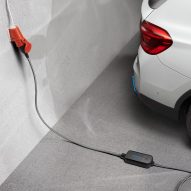 "The winged form of the canopy is instantly recognisable within the urban environment, with a lightness and elegance that evokes the distinctive Genesis wing emblem and Genesis' core design identity of 'athletic elegance,'" said the studio.

Each model can charge up to three vehicles at a time, with some chargers taking only 20 minutes to bring a car to full capacity, according to Morphosis.

Founded in 1972, US firm Morphosis has completed a range of international architecture projects. These include a tower in Seoul that features a facade crafted from high-tech fibre used to make bullet-proof vests and a striking asymmetrical supertall skyscraper in Shenzhen, China.

Other creative EVC designs include a pair of tree-like timber stations by architecture studio Cobe and a concept for EVCs by Woods Bagot that has the stations double as drive-in movie theatres.

The photography is by Namsun Lee.