The organisers of the FIFA 2022 World Cup in Qatar have been accused of making misleading promises about the event's carbon neutrality by significantly underestimating the emissions associated with its newly built stadiums.

Claims that the tournament will be the "first carbon-neutral FIFA World Cup in history" are "far-fetched" and rely on "creative accounting", according to a report released by non-profit advocacy group Carbon Market Watch.

The report found that emissions from the World Cup's new venues, including Zaha Hadid's Al Wakrah Stadium and the Lusail Stadium by Foster + Partners, are up to eight times higher than outlined in the event's own carbon calculations, making them the biggest contributor to the World Cup's overall footprint.

In addition, the offsetting schemes that are being used to compensate for these emissions have a "low level of environmental integrity", the report found.

"The carbon neutrality claim that is being made is simply not credible," said the report's author, policy analyst Gilles Dufrasne.

"The evidence suggests that the emissions from this World Cup will be considerably higher than expected by the organisers, and the carbon credits being purchased to offset these emissions are unlikely to have a sufficiently positive impact on the climate."

The "most compact World Cup in modern history"

Qatar 2022, which is set to kick off in November, marks the first time that FIFA has developed a joint sustainability strategy in collaboration with a host country, with the aim of "delivering a fully carbon-neutral" tournament.

With this goal, the organisers have enacted a range of measures to reduce emissions, firstly by making it the "most compact World Cup in modern history" and placing all venues within 50 kilometres of the city centre in Qatar's capital Doha.

This eliminates the need for players, visitors and officials to take domestic flights and allows them to stay in the same accommodation throughout the tournament in a bid to slash travel emissions.

Out of the World Cup's eight venues, seven have been constructed from scratch – including a demountable venue made from shipping containers – while the Khalifa International Stadium was extensively redeveloped.

All of these stadiums are built for energy and water efficiency, according to the organisers, and are on track to reach a four-star rating in the Global Sustainability Assessment System (GSAS) – Qatar's answer to green building certificates like LEED and BREEAM.

Some of the stadiums will also be partially lit using renewable energy.

Taking all these measures into account, the Qatar World Cup is set to emit 3.6 million tonnes of carbon dioxide, according to a report published by the organisers.

That is already 1.5 million more tons of CO2 than were generated as part of the 2018 World Cup in Russia and more than the whole country of Iceland emits in a year.

But this number grossly underestimates the emissions from buildings, which at around 1.6 million tons are up to eight times higher than the figure reported by the organisers, according to the report from Carbon Market Watch. 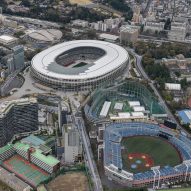 That's because their carbon calculations are based on a "use-share" model, in which the World Cup doesn't take responsibility for all of the stadiums' whole-life emissions, but only for a small portion relative to the duration of the tournament.

The remainder of the buildings' footprint is attributed to the occupants, who will take over the stadiums once the World Cup has come to a close.

"This is problematic because these stadiums have been constructed specifically for the World Cup," the report explains.

"Future extensive use of so many stadiums in such a small geographical space is uncertain, especially when considered against the fact that Doha had only one major stadium before it was awarded the World Cup."

As a result, the carbon credits that are being purchased by the organisers would not be enough to offset the event's actual emissions, the report states.

The report also questions the efficacy of what it describes as "low-quality" carbon credits, given that they are issued by a certification scheme that was newly established for the tournament and has so far registered only two projects.

As the world aims to reach net-zero emissions by 2050 in a last-ditch effort to limit global warming to 1.5 degrees Celsius, temporary mega-events like the World Cup are increasingly coming under scrutiny for their irresponsible use of resources.

Last year, the Tokyo Olympics were accused of similar greenwashing efforts, after organisers claimed that the event would be the greenest Olympic games ever.

The Qatar World Cup previously came under fire for the working conditions on its construction sites, after reports that a number of migrant workers had died while building Zaha Hadid's Al Wakrah Stadium.

All imagery is courtesy of the Supreme Committee for Delivery & Legacy.