Welsh startup Space Forge has developed the ForgeStar-0 satellite, which will make electronic components and materials that are "impossible to manufacture on Earth" in space.

Set to be launched into orbit later this year from the UK's first domestic spaceport, the Forgestar-0 prototype satellite was designed to act as a space factory that can return to earth.

"We are building the world's first fully returnable and re-launchable satellite platform, the ForgeStar to create materials in space, which are impossible to manufacture on Earth," explained Space Forge co-founder Joshua Western.

"The ForgeStar platform that we are building is a flexible modular satellite consisting of an orbital module and an interchangeable microgravity capsule," he told Dezeen.

The inaugural Forgestar-0 mission, which is due to take off later this year, will test the prototype satellite's return capabilities.

It will head into space along with several other satellites on a rocket called LauncherOne which was developed by Californian-based launch company Virgin Orbit – a subdivision of the Richard Branson-owned company Virgin.

Satellite "will leverage the benefits of the space environment"

On subsequent missions, the satellite is designed to autonomously manufacture semiconductors, metal alloys and pharmaceuticals in its cleanroom.

After several months in orbit, it would return to Earth where the products will be transported to customers. The satellite will then be refurbished ready to be reused and sent back into space.

According to Western, creating materials in space has three major advantages in comparison to earth: colder temperatures, no oxygen and zero gravity.

"We are taking the same industrial processes we use on Earth but leveraging the benefits of the space environment," Western said.

"Space Forge will leverage the benefits of the space environment, namely: microgravity, vacuum, and temperature," he continued.

"Gravity prevents the perfect mixing of metals and extreme temperatures required for manufacturing are difficult to obtain and maintain."

"Scientists are looking to space for solutions"

Space Forge said that the satellite will be able to create far lighter alloys than the ones currently being made on Earth, where gravity often causes the metals to separate into two layers, with the densest metal at the bottom.

"In areas such as biomanufacturing, where tissues and organs are produced, gravity-induced- density makes it difficult for cells to grow, which is why scientists are looking to space for solutions," he added.

The company believes that the zero-gravity conditions in space are also more suitable for the production of semiconductors.

Semiconductors are routinely found in a number of electronic devices, including diodes, transistors, and integrated circuits – which underpin many everyday devices including bank ATMs, trains, the internet and refrigerators.

"The microchips that underpin modern electronics are crystal lattices made from molten silicon," said Western.

"On Earth, the process to make these can create gravity-induced defects and these defects in the crystal structures affect performance, becoming magnified as electronics shrink ever smaller," he continued. 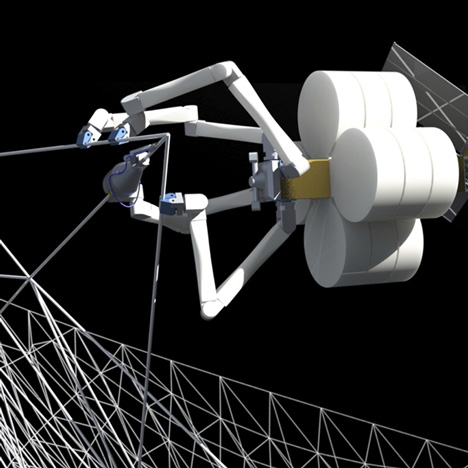 The startup also believes that the cleaner environment in space will pave the way for the creation of new, purer alloys because there is no air contamination in space, as the pressure is around ten trillion times lower than on Earth.

"The vacuum of space removes the need for multi-stage pumps and eliminates contamination," explained Western.

According to the company, the third advantage of creating materials in space is the colder temperatures, which are beneficial for the production of semiconductors.

"From cryogenic refrigerators to furnaces, temperature extremes are difficult to create and maintain," explained Western.

Space Forge isn't the first company to develop a factory for outer space. US space agency NASA is developing an orbiting factory that will use 3D printing and robots to fabricate giant structures.