The Victorian Pride Centre is a five-storey building located in Melbourne's beachside suburb of St Kilda and offers its queer community access to a number of services and safe spaces.

L-shaped in plan, the form of the building was derived from a collection of tubes organised in a stacked formation that grow taller as its volumes stagger further from the street.

Its facade incorporates circular and oval-shaped cutouts across its street elevation and is used as a shaded portico on its street-facing ground level as well as sculptural terraces across its first and second.

The concrete exterior is detailed with a skewed shadow of the circular cutouts that punctuate its facade – exposing the textural layers of concrete beneath.

Terraces are located at the front, street-facing areas of the building providing the Victorian Pride Centre with a prime location for events as well as viewing areas for relevant street parades and marches.

Designed by Brearley Architects and Urbanists and Grant Amon Architects, the building houses a number of organisations that will use the centre as their base while also providing spaces for external group meetings, events and projects.

Alongside its workspaces, the Victorian Pride Centre contains health and welfare centres, a book shop, a gallery and a theatre. A cafe, rooftop events space and a community garden or set to be added as the next stage of development. 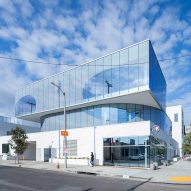 The interior has a similarly sculptural look, its exterior tubular forms are continued and run linearly through the centre – carving tunnels and subtly zoning spaces.

Structural concrete and services, including pipe and electrical works, remain exposed throughout the interior juxtaposing against warm-toned timber, colourful ceramics and velvet fabrics.

A triple-height ellipsoid-shaped atrium located at the heart of the centre is flooded with natural light by the use of an amorphous skylight.

From an informal, wood-lined amphitheatre and curving staircase, sculptural white-painted walls undulate throughout the atrium, stretching and spanning between its multiple levels.

Brearley Architects and Urbanists and Grant Amon Architects were selected to design the Victorian Pride Centre following an open call competition in 2018.

In Los Angeles, Leong Leong and KFA built The Anita May Rosenstein Campus, a white stuccoed and curving glass LGBTQ+ centre in Hollywood.

Danish firm 3XN unveiled designs for a 153-metre-tall apartment building in Toronto that would also be used to host events and for Toronto's LGBTQ+ community.

The photography is by John Gollings.