Nomadic art gallery The Radford Gallery has shown a selection of sculptural pieces in materials such as limestone, marble and aluminium in London for its Hard Knocks exhibition.

The aptly-named Hard Knocks show featured works from eight different artists and designers, all of whom had shown with the gallery at a previous exhibition.

Curator Max Radford, who founded The Radford Gallery in 2019, originally found the artists who participated on Instagram and began putting on physical shows for people to see the works in real life.

The idea of covering the same artists is meant to demonstrate how their work has evolved over the years.

"This lets us work with them in the process; the way people were selected for the previous shows was through the materials they're working on," Radford told Dezeen.

"Through that idea for the last show, we went into doing it for this one," he added. "With some of them, like Lewis' work, he's been thinking about it since last year and we've been talking about it the whole time."

"It's about seeing people's progression and setting the right time to show their work."

The exhibition took place in a temporary gallery space on east London's Kingsland Road, as The Radford Gallery doesn't have a permanent setting but changes its location from show to show.

Among the tactile pieces on show was EJR Barnes' Il Sandolo, a sculptural reclining chair made from walnut, fibreboard, cotton foam and paint.

Samuel Collins also worked with stone but used a more delicate limestone to design his puzzle-like Small Structure with three parts that slot together to create a sculpture.

Another of his sculptures on show, called Path to the Sea II, was made from multicoloured marble.

The concept for the show was kept very open, with Radford choosing the pieces based on his knowledge of the artists' work.

"We didn't set any parameters for anyone to work with, we sort of selected [the pieces] to work with [the concept] – I knew what people were working within already," he explained.

"The name of the show works well with things made out of timber and stone and it just came to me." 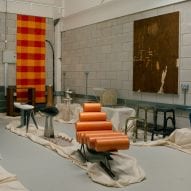 Wood was also a commonly used material in the show, with designer Lewis Kemmenoe creating his Intersect chair from turned cherry, iroko and sapele wood with a leather seat.

Eduard Barniol contributed his Untitled lamp sculpture, which is constructed from different types of wood including plywood and pine wood, as well as metal pins and fabric.

Matthew Verdon combined hemp fabric with bamboo and hemp twine for his expressive Menton lamp, while Katy Brett added a touch of metal with her undulating aluminium chair, Unearthed.

Walls were decorated with Meryl Yana's evocative abstract pictures made from ingredients including paper, turmeric, indigo powder and emulsion paint on MDF board.

Material was also at the forefront of In der Elst's Soft Works exhibition, which was on show during this year's 3 Days of Design festival in Copenhagen.

The photography is by Richard Round-Turner.

Hard Knocks was on show at The Radford Gallery between 29 July and 7 August 2022. See Dezeen Events Guide for an up-to-date list of architecture and design events taking place around the world.