The live-work space was renovated from a century-old shoe factory featuring steel windows, exposed concrete beams, and a double-height pitched roof. The studio took a minimalistic approach to the renovation, aiming to enhance the 1924 building’s original features.

"It was key for us to not only retain, but also celebrate the existing suspended slabs and concrete beams which tell the story of how the building was originally built," studio co-founders Greg Walton and David McGahon told Dezeen.

"By exposing the rawness of the existing brickwork and imperfect concrete, we were able to contrast this with softer tones and textures, be that the clay finish to the walls or the reclaimed timber boards on the floor, whilst mirroring the variation and depth inherent in such finishes."

Harries and Aedy wanted a space where they could both live and work on their media company Earthrise, which has a focus on communicating the climate crisis. The duo briefed the studio to design a multi-purpose space suitable for recording podcasts and hosting social gatherings, work meetings, and photoshoots.

While the 100-square-metre space was made to serve various different functions, the studio wanted to maintain a sense of continuity throughout the building by keeping the design as simple as possible in all spaces.

"Whilst the joinery is highly specific to the needs of Jack and Alice, it is in essence a very simple intervention that ties together the entirety of the upper floor, and blurs the intersection between the functions required by a kitchen space, dining space, work space, and living space," said Walton and McGahon.

"This element of the scheme remained consistent from concept to completion and is integral to ensuring a continuity within the space."

Studio McW redesigned the entrance level, opening up the existing partitioned bedroom and dressing room to create a large aperture to draw light through the new glazed internal wall to the bathroom and utility space.

Above, an open-plan living space is accessed by a staircase made from reclaimed Georgian pine floor boards, beside which runs a black steel balustrade. 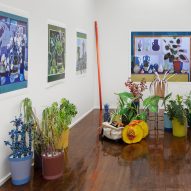 Prior to the renovation, this floor was constricted by redundant overhead services and an unused concrete doorway. The studio removed these to open up the space both vertically and horizontally.

A new concrete sideboard spans the length of the room, acting as seating and storage as well as displaying the clients’ collection of artwork, photography, and cameras. A matching concrete island sits in the centre of the kitchen.

The main space also features custom oak joinery, including a table, a shelving unit, and additional floating shelves. Both levels of the building were finished with toxin-absorbing matte clay walls.

"Greg and David created a space that feels very much in the spirit of Earthrise. The apartment is a natural, flexible, and beautiful backdrop to our work and lives, and the design allows it to oscillate between functions accordingly," Alice Aedy commented.

According to the studio, the apartment remains well protected from the potential of overheating despite the age of the structure.

"The open stair, tall ceilings to the living space and openable windows all contribute to passive stack ventilation which assist in keeping the space cool," said McGahon and Walton. "The apartment has glazing that opens on both the east and west faces, allowing for cross-ventilation during the warmer summer months."

The studio hopes additional recent and future refurbishments will improve the levels of thermal comfort.

"The roof of the building had recently been refurbished with vast improvements made to the thermal performance," Walton and McGahon commented.

"All of the building occupants have contributed towards the replacement of the existing single-glazed steel Crittal windows throughout," they continued.

"This will provide vast improvements to the thermal performance of the glazing, whilst retaining the style akin to the original building. These works are due to take place over the next year."

Founded by David McGahon and Greg Walton, Studio McW is an architecture practice operating across the UK whose recent projects include a London home extension with oak joinery.