London-based Tawbox studio intended to reflect our fractured world by creating a set design featuring an aluminium heart that shattered and came back together during recent shows by British rapper Dave.

The stage featured large LED screens and an aluminium heart that resembled a chunky cage and was illuminated in various colours as the rapper's set unfolded.

"It was important for Dave that the audience was taken on a journey throughout the performance," Rimell told Dezeen. "One that was full of drama, high energy, dynamics, highs and lows."

According to Rimell, Dave wanted the set to represent life in his native London, from where he often draws influences for his music.

"The set served as a reflection of the broken and fractured world we live in today, yet full of music and energy," she explained.

After starting the show intact, the fully formed heart broke in two during Dave's performance of his track Heart Attack from his most recent album, We're All Alone In This Together.

The rapper remained standing at the front of the stage for the almost ten-minute song, while a live band was concealed behind the installation as it glowed a menacing shade of red.

"It was important to decide what the heartbreak would look like," reflected Bronski. "The distance between both sides had to feel big, but coherent." 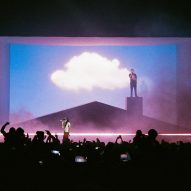 Later in the performance, the kinetic installation fractured further during Dave's rendition of the track Starlight to reveal four broken "constellations", while by the set's finale, the heart was whole again.

"With the full circle of the heart reforming comes a message of how music brought everyone in the festival field together in the present moment," added Rimell.

A mixture of abstract imagery was displayed on the screens behind the heart-shaped structure, such as footage of crashing waves and the palm of a hand.

The creative directors explained that they worked with live experience studio TAIT to facilitate the movement of the installation, which was aided by both flown automation and "good old manpower".

Most of the set's materials will be repurposed and recycled for future shows, according to Rimell and Bronski.

BAFTA-nominated Tawbox has designed a number of sets for live performances, including the set for Dave's 2019 tour of his first album Psychodrama.

The images are courtesy of Tawbox.