The fair, which is set to take place between 7 and 11 February 2023 after being postponed three times as a result of the coronavirus pandemic, will also be given a new graphic identity by Swedish design studio Stockholm Design Lab.

"We are thrilled to collaborate with such an important design institution as Stockholm Furniture Fair and we look forward to giving Scandinavia's leading design fair an even greater international perspective," said Björn Kusoffsky, CEO and founder of Stockholm Design Lab.

Stockholm Furniture Fair, one of the largest fairs in Scandinavia, also announced it is launching a new Scandinavian Design Award together with publishing house It is Media, which will celebrate both established and emerging designers from the region.

Other new initiatives that were announced include turning Älvsjö Gård, a manor located close to the fairground, into a platform for experimental and collective design, and the launch of an interactive app that will cover both the fair and the design week.

The guest of honour for the next edition of Stockholm Furniture Fair will be Front, marking the first time that a Swedish design studio has been given the title. Previous guests of honours include Patricia Urquiola, Neri&Hu and Nendo.

Front is set to design an installation for the fair, which will be on display in its entrance hall. 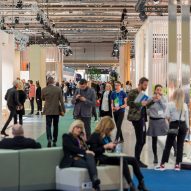 Ung Svensk Form – a touring exhibition and scholarship for designers aged 36 or younger – will also return to the fair's Greenhouse area, which is dedicated to emerging design.

Stockholm Furniture Fair and Stockholm Design Week are led by the same organiser and there will be "more synergy" between the two events in the future, the fair stated.

"We have a trade fair with over 70 years of experience and combined with the agility of the Stockholm Design Week, it's a winning combination."

Stockholm Furniture Fair is one of a number of fairs that were cancelled or postponed during the coronavirus pandemic, including Germany's IMM Cologne, China's China International Furniture Fair and Italy's Milan Design Week.

However, this year's Salone del Mobile, which was held later than usual, saw energy "exceed the pre-pandemic level," according to visitors.

Stockholm Furniture Fair will take place from 7 to 11 February 2023 in Stockholm, Sweden. See Dezeen Events Guide for an up-to-date list of architecture and design events taking place around the world.