A large steel-clad cube encloses the Dance House in Helsinki, which local architecture studios JKMM and ILO architects have created by converting and extending part of a former cable factory.

Providing over 7,000 square metres of space, the Dance House forms part of a wider redevelopment of the old industrial building that was acquired by the city in 1991 to create the Kaapelitehdas, or Cable Factory, which is Helsinki's largest cultural centre.

JKMM and ILO architects were tasked with reconfiguring part of the existing structure while adding new spaces to its eastern end, housed inside a steel-clad cuboid informed by the "gravity, lightness and weight" of dance.

"The Dance House adds a striking contemporary layer to the history of the former factory and its surroundings," said JKMM.

"The new and old are placed in contrast, but also in dialogue with each other. Together, the Dance House and the Cable Factory create a meaningful destination and a revived neighbourhood," JKMM continued.

Inside are two black-box dance studios. One of them is housed in the Cable Factory's redesigned Pannu Hall, which now seats up to 400 people, and the second is the new 1,000-seat Erkko Hall – the largest dance performance space in the Nordic countries.

These two performance spaces sit on either side of an entrance lobby, which connects to an enclosed street-like space between two existing facades, described by JKMM as a "glass courtyard".

An underground club, cloakroom facilities, restaurant, rehearsal and back-of-house spaces are organised across the building's five levels, with all of the circulation spaces designed to have the potential to be used for performance. 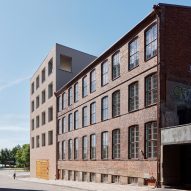 JKMM incorporates industrial structures into University of the Arts Helsinki

"All the public spaces in the Dance House have been designed with performance in mind," explained JKMM's project architect Harri Lindberg.

"It is possible for dance to take over, for example, the entire Cable Factory for the duration of a performance," he continued.

Large steel panels, one of them highly reflective and one weathered, form the facade of the extension, hung slightly above the ground and at different levels to give the effect of them shifting away from one another.

On the building's north elevation facing a nearby park, the stacked levels have been covered in hundreds of small aluminium discs, designed to create an "abstract rhythm" against the sky.

"Dance deals with gravity, lightness, and the weight of the human body," explained JKMM.

"Dance performers also create illusions. The light, satin-like steel surface can be transformed with light, becoming part of the scenery of dance events."

Inside, robust materials such as raw steel and concrete have been chosen to complement the existing structure of the former factory.

JKKM recently incorporated heritage structures into another of its designs in the Finnish capital, creating a new home for the University of Arts Helsinki that partially occupies an old soap factory and silo building.

The photography is by Peter Vuorenrinne unless stated otherwise.