British architecture studio Foster + Partners has completed a skyscraper in New York, which is the "first full-block office building" to be built on Park Avenue in over 50 years.

Designed by Foster + Partners to push "the boundaries of workplace design", it features double-height planted terraces as well as an external structure that gives rise to column-free interiors.

"425 Park Avenue celebrates its historic context and the restrained elegance of its landmark neighbours, while simultaneously pushing the boundaries of workplace design and reflecting the contemporary spirit of the city," said the studio's founder Norman Foster.

"The building's architectural form and structural expression are inextricably linked, providing it with a distinctive identity," he added.

"The floors with external terraces are the first of their kind on Park Avenue, creating a permeable and healthy working environment."

The 425 Park Avenue skyscraper was first unveiled in 2012. It was developed by Foster + Partners in collaboration with real estate developer L&L Holding's project team.

Alongside private office spaces, its 262.1-metre-high form incorporates a number of public spaces including a triple-height lobby, a restaurant and a showroom. 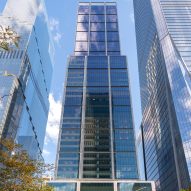 "It has been a great privilege to design a new building that stands alongside some of the city's most remarkable landmarks," reflected head of studio Nigel Dancey.

"The tower makes a major contribution to the public realm at ground level, with its lobby, world-class restaurant and showroom space."

Foster + Partners has divided 425 Park Avenue vertically into three sections, which gradually step back from the street edge to create a staggered form.

These sections include a seven-storey base, which is topped by a central section and a third and final volume containing the slender "premium floors".

According to head of studio Dancey, the decision to brace 425 Park Avenue externally means that its interiors are open and highly flexible. This is also helped by offsetting the building's core.

By offering tenants a flexible interior, the tower accommodates "the changing requirements of contemporary workspaces" and helps "to futureproof the building", he said.

The external structure, which is made from a combination of steel and concrete, rises to meet three shear walls that complete the tower.

Positioned at the top of 425 Park Avenue, these walls project upwards and distinguish the building from afar.

Founded by Foster in 1967, Foster + Partners is an international architecture studio headquartered in the UK. Elsewhere in New York, the studio recently completed a supertall skyscraper that forms a part of the Hudson Yards development in Midtown Manhattan.

This week, the practice also revealed it had completed the Varso Tower in Warsaw, which is the European Union's tallest building.

The photography is by Nigel Young unless stated otherwise.