Local studio Starh has completed an office and apartment building on a triangular plot in the Bulgarian city of Varna, featuring cantilevered balconies that extend out towards the nearby sea.

Situated to the east of the city centre, the EOS building is only separated from the Black Sea by the Sea Garden public park, ensuring the building receives early morning sunlight.

According to Starh, which has offices in Varna and Sofia, the building's triangular form was directly taken from the shape of the existing plot, which is flanked by a road and neighbouring apartment blocks.

"For the first time we had the opportunity to work on such an oddly shaped plot and we took the chance to design a triangular prism," Starh founder Svetoslav Stanislavov told Dezeen. "The triangular shape can be seen on the corner balconies, all terraces and the building footprint itself."

The mixed-use building has apartments from the third to the eight floors, with offices housed on the first and second floors above commercial premises alongside the entrance foyer on the ground floor.

The building's exterior presents a strong horizontal profile covered in crisp, white cladding that echoes the prevailing architectural aesthetic of this seaside resort.

"The neighbourhood where EOS is located was planned by the government a couple of decades ago and has a unified architectural language and aesthetics," Stanislavov explained.

"We took this into consideration when choosing the facade materials in order to blend in and to highlight the context." 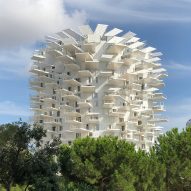 Balconies branch out from Sou Fujimoto's tree-like tower in Montpellier

The apartments are planned in such a way that the interiors all have orthogonal layouts, with only the east-facing loggias featuring triangular outlines.

Terraces on the building's eastern corner project outwards to make the most of the views. These cantilevered balconies reach up to eight metres in length on the upper floors.

"Having the possibility of a stunning view towards the sea and the Sea Garden was something not to miss," Stanislavov added.

"Exaggerating the balconies with a 360-degree view forward has increased this impact."

The cantilevered sections required complex engineering and were developed in collaboration with a specialist contractor using post-tensioned concrete beams to achieve the desired effect.

Materials used throughout the project were chosen for their longevity and ease of maintenance. These include fibre-cement cladding panels, aluminium window frames and high-performance glazing.

The photography is by Dian Stanchev.