A large, angular window cuts through the otherwise traditional form of this timber cabin in Norway, designed by local architecture studio Rever & Drage.

The building was designed for the owner of an adjacent 1930s cabin in the forested region of Nordmakka north of Oslo, who wanted to upgrade the facilities on the site without altering the existing structure.

Rever & Drage referenced and reinterpreted the historic cabin with a complementary modern structure with electricity and running water, keeping the adjacent historic cabin as a more rustic setting.

In order to have a minimal impact on the site, six steel bolt foundations in the bedrock were used to raise the new cabin off the ground, allowing it to be easily removed in the future.

"Historically this kind of building has served as a shelter while doing other recreational activities such as hiking, hunting or fishing," said Rever & Drage.

"Since the days of [Henry] Thoreau's Walden, however, the small retreat or bolthole has also been a goal in itself, typically to escape the stresses of everyday life."

Together, the two cabins form two sides of a courtyard that is left open towards the southwest for unobstructed sun and views of the landscape.

The northeastern side of the new cabin mirrors the appearance of the old cabin with small, square windows, a simple wooden door and a wall-mounted metal lamp.

Facing the view on the opposite side, however, the new building takes on a more contemporary appearance, with a large angular corner window looking out towards the landscape.

A pitched canopy of wooden slats provides a small area of shade from the sun at its highest point, extending downwards to create a bench. 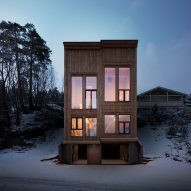 "It was important for the client to keep the old-fashioned 1930s charm in the main outdoor area – the new cabin, therefore, has windows in its facade that relate to the windows of the old cabin," explained the studio.

"At the same time [they] wanted an undisturbed view towards the sunset. To avoid conflict between these two goals a bench is placed in front of the open glass corner, concealing the latter from the outdoor area."

Inside the new cabin, the ground floor contains a small kitchen and bathroom area, stepping up into a living area that doubles as the main bedroom, with a wooden ladder leading up to a children's play and sleeping area.

Rever & Drage was founded by Eirik Lilledrange, Martin Beverfjord and Tom Auger and is based in Oslo and Flekkefjord, Norway.

Previous projects by the studio include a modern take on a traditional log cabin overlooking the Moldefjord on Norway's west coast and an aluminium-clad public toilet on one of the country's national scenic tourist routes.

The photography is by Tom Auger.