These sets of kitchen utensils by Kingston University graduate Oliver Richardson stack into totem-pole arrangements in the order they are likely to be required (+ slideshow).

Oliver Richardson designed each of the Kitchen Totems for kitchen rituals that take place at different times of the day.

"Most utensils are put into draws in no particular order," said Richardson. "The Kitchen Totems group utensils according to the ritual they are associated with." 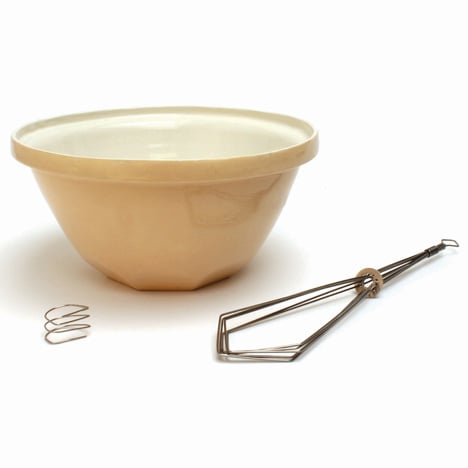 "Unlike traditional totem poles of Native America, where each figure resembled a family member or specific historical moment, the components of the kitchen totem are functional objects."

The first totem Richardson designed is based around the process of boiling eggs, and combines an egg timer with a series egg cups which can be stacked in a range of different ways to produce multiple forms.

The second totem pole was designed for an evening at home and combines a bottle stop, a corkscrew and a candlestick holder so the user can enjoy a glass of wine by candlelight.

The third totem pole is used to help cook a steak dinner. A marble meat tenderiser is combined with salt pot and peppermill to season the cut.

Each component is made using a different craft technique such as wood and marble lathe turning, and bronze casting. "It was important that the materials were selected according to the objects' functions - I wanted there to be a language that the user could interpret between material and function," Richardson told Dezeen. "The differing materials also define each object when they were stacked together."

Richardson designed Kitchen Totems while studying at Kingston University and the project is currently on show at London's Business Design Centre for the second part of the New Designers graduate exhibition, which continues until 5 July.

Fellow Kingston University graduates are exhibiting other designs for the kitchen at the event. These include a series of hybrid eating utensils formed by fusing western and eastern cutlery, and a kettle shaped like mugs to save water when making tea.