This take on a traditional Slovenian cottage by Dekleva Gregorič Arhitekti features cast concrete walls inlaid with chunks of stone to create a rugged texture (+ slideshow).

Ljubljana studio Dekleva Gregorič Arhitekti designed the Compact Karst House for a young family in Vrhovlje, a rural municipality on the Slovenian-Italian border, where it is positioned on a slope to take in views of neighbouring woodland and an Italian church.

The building's concrete exterior has been inlaid with irregularly shaped and coloured pieces of stone. 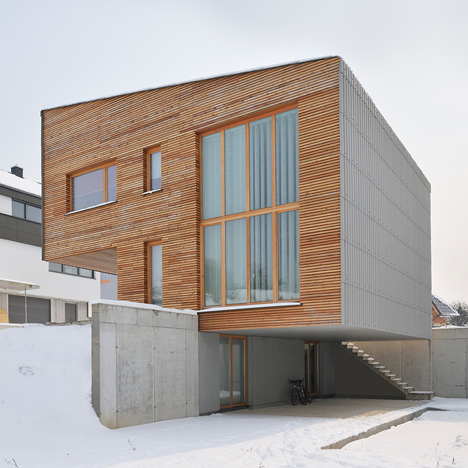 The stone, set into the concrete during the casting process, gives the walls the appearance of having a solid masonry construction – a technique studio co-founder Aljosa Dekleva said was also employed by his architect father in the 1970s.

"It is a 15-centimetre thick facade layer where the builder first lays down a row of stones, with the more or less flat side of the stone against the framework, and than pours concrete behind the row of stones," said Dekleva.

"When the framework is removed, after one or two days, the builder would eventually remove excessive amounts of concrete to open the surface of the stone."

The densely-packed stone and concrete walls, punctuated by three large windows, are intended to offer a modern take on the compact stone walls of houses traditional to the Karst region.

"The design of the house addresses the relationship between contemporary and tradition," said the architect.

Another intention of the design was to make the facade and roof appear to be made from the same materials – a typical feature in traditional Karst architecture. Hence, the concrete stepped roof rises directly up from the stone walls without any overhanging eaves.

"The redefinition of the traditional stony Karst roof, with its texture, colour, material and its steep inclination is executed as a contemporary concrete interpretation," said the team.

A concrete perimeter wall, imprinted with the grain of wooden planks, encircles the base of the property to distinguish a patch of private garden from the surrounding woodland. This is intended to pay tribute to the oak forests of the Karst region that have now been desecrated by construction works.

Beginning at the upper part of the site, the wall increases in height as it winds its way down the hill, where it conceals a set of steps that lead up to the entrance of the house.

The gabled form of the building is replicated inside by two smaller wooden volumes that subdivide the floor plan, framing a living room, kitchen and bathroom on the ground floor and creating two bedrooms upstairs.

A staircase with staggered wooden box treads creates a series of individual bookcases that angle over a black writing desk underneath. A television screen built into the front of the desk gives the unit dual functionality.

The steps lead onto a gangway between the two bedrooms. This platform is used as a playroom and has sides enclosed by a rope grid, like a playground climbing frame.

Photography is by Janez Marolt.