The Vase #1 echoes the form of the distinctive cross-shaped columns of Niemeyer's 1958 building in Brasília, which serves as the official residence of the president of Brazil.

"I abstracted the Palácio de Alvorada's strongest shape into a vase that captures the spirit of the building," said Soepenberg. 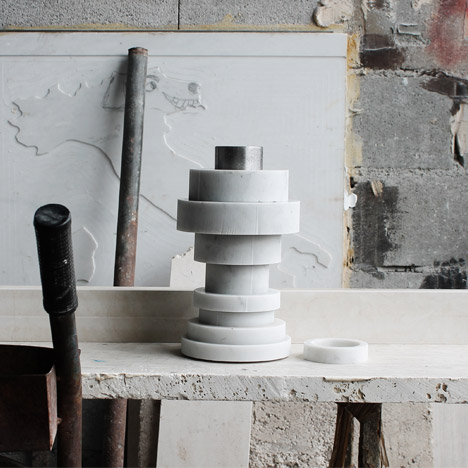 The vessel is made from concrete using rotation moulding, an industrial process normally used with plastics.

A custom-built machine is used to spin the concrete within a mould, creating the thinnest possible form for the concave vases. The inside is coated with acrylic resin to make it watertight.

"I wanted the vase to look slender and sturdy at the same time, so I searched for a moulding technique that would allow me to form an object in one single piece, without putting strain on any part of the design," Soepenberg said.

"Rotational moulding seemed the way forward because it would allow for making a thin-walled, yet very strong product," he added. "After a lot of broken vases I found a way to make it work."

Soepenberg studied architecture before he moved into product design and remains interested in both disciplines.

"Product design is very similar to architecture, only at a different scale and with a lot more freedom, so much faster," he told Dezeen. "I've long wanted to use my fascination with architecture in a product design."

Soepenberg chose Niemeyer – who died in 2012 – as the first architect to use as inspiration for a planned series of vases.

"Oscar Niemeyer is one of the greatest architects with the best feel for aesthetics and proportions, so it was a logical choice for me to start with him," said Soepenberg.

His next design, inspired by a Frank Lloyd Wright building, will be unveiled in the Ventura Lambrate district during Milan's design week from 14 to 19 April.