Students from the Institute of Architecture and Design Chihuahua have used scaffolding, wood and fabric to turn a disused park fountain into a shaded urban spa for local residents (+ slideshow).

The temporary spa has been constructed around an existing fountain in Chihuahua's central Urueta Park, and is formed of a circle of nine towers constructed from metal scaffolding bars.

Each of the towers is topped by a wooden canopy, composed of scaffolding boards, and is linked to the adjacent tower with a sheet of coloured fabric. A wooden walkway leads up to the fountain, and also encircles and gives access to the central water source.

The Urban Spa installation was designed as part of the institution's annual Taller del Desierto workshop, which this year tasked students with designing a temporary structure in the park. 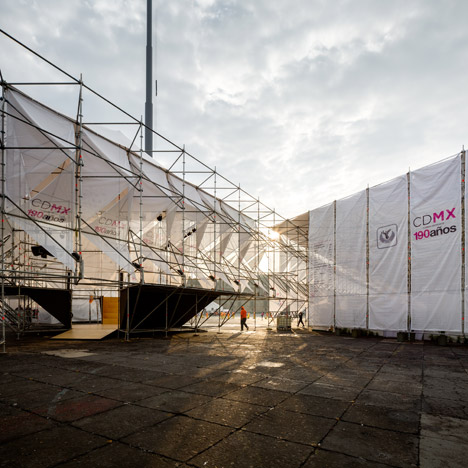 After an initial round of research and design proposals, the students discovered that many locals wanted to fix the public water fountain at the centre of the park, which had been non-functional for years.

The project follows the installation of a wooden pathway over the Fonte Luminosa fountain in Lisbon earlier this summer, and an initiative that added beach loungers, garden furniture and toys to the water features of Guimarães in 2012.

The students in Chihuahua spent a week designing the installation and another week assembling it, working with a group of volunteers to bring it to life.

The scaffolding boards, wooden walkways and platforms transform the fountain into a public bathing area. Locals can enjoy seating areas, as well as hammocks supported by the overarching scaffolding structure that also provides shade to bathers.

"It transforms the whole place by means of the generation of a micro-climate resulting from the combination of shaded areas and moving water pouring from the newly reactivated source," architects PKMN said in a statement.

"Urban Spa was born as a unique proposal, but at the same time it's being considered as an alternative for the reactivation of unused water sources in the city of Chihuahua. Maybe also in other cities."

The spa will remain in place until the end of September, with the university currently raising money to turn the installation into a permanent fixture.

Architecture studio MMX also recently used scaffolding when it erected a temporary 6,000-square-metre structure in Mexico in just three and a half days.