In the 10th and final instalment from our exclusive MVRDV movie series, architect Winy Maas explains how the firm's huge arch-shaped market hall in Rotterdam has become a place for meeting and celebration (+ movie).

Completed almost a year ago, the Markthal is one the Dutch firm's most important projects to date. It comprises a 40-metre-high arch with apartments around the outside and a grand covered market in the centre.

In the movie, Maas describes the building as a monument for the city. "I think the subject and the design, somehow that combination leads to a place that people start to adore," he says. 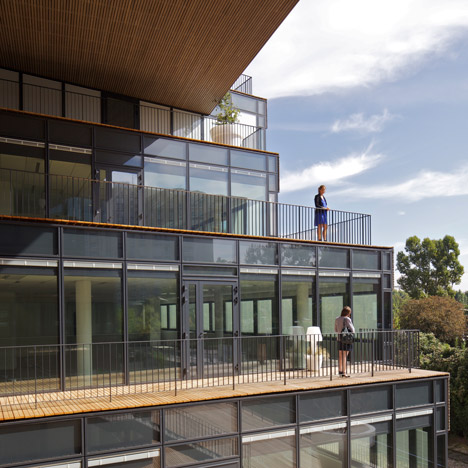 "It's not an icon as such but it's exactly that emotion that this thing can deliver."

A total of 228 apartments are contained with the chunky arch that frames the building.

The hall itself – modelled on food markets in Stockholm, Barcelona and Valencia – features glazed walls at both ends. Its internal walls are covered with a colourful one-hectare mural by artists Arno Coenen and Iris Roskam.

Square windows puncture curved internal walls, allowing residents to look down onto the market, while balconies run along the sides of the building, with views either towards the historic Laurens Church or the River Maas.

"It always seems to us like a sort of aquarium," says one resident in the film, while another describes the building as being great for the city.

As well as the market stalls, there is also a series of shops selling food-related produce, plus an underground supermarket.

"As someone working here every day, you'd think I'd get used to it but I haven't," says one of the staff members. "You sense that this place is alive. The building doesn't simply stand here just to be pretty, there's always something happening."

"Sometimes on Saturdays and Sundays, it looks as if Rotterdam has its own theme park in here!"

This movie is the 10th in a series profiling the firm's work, which also includes a Stuttgart house with a staggered form and a polychromatic apartment building on Amsterdam harbour.