Design Miami 2015: Italian designer Antonio Aricò has created a set of small storage items for organising desks that can be arranged to look like a still-life painting.

Aricò's Still Alive set for Italian design brand Seletti includes a range of materials, shapes and sizes taken from different contexts, such as a kitchen, a bar and a garden.

His products are designed to be used together to resemble a jumble of objects similar to those used in arrangements for still-life paintings.

"For this new collection specially designed for Seletti, Antonio wanted to play with inanimate objects and natural shapes usually put together by painters," said Aricò's studio. 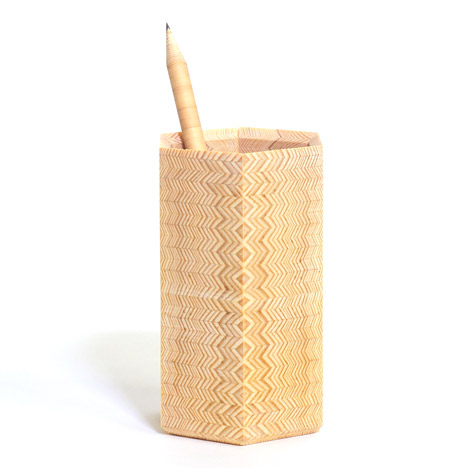 The set includes a terracotta-coloured pitcher for holding longer items like rulers and scissors, while a wooden vase is divided into three parts for storing items such as tacks and paperclips.

A brass cup can be used as a pen holder and a wooden pencil box tidies away writing implements.

Designed as both a paperweight and a magnifying glass, a transparent glass sphere is one of the smaller pieces in the range.

There is also a porcelain bottle for holding single flower stems and a resin pyramid-shaped box for hiding other small items.

"All of these elements are highly functional, so Still Alive will become part of your daily routine – ready to be used on your desk or living room table," said Seletti.

The items each have a place on a wooden board, with footprints marked out so the user knows exactly how to recreate the original composition.

Still Alive will be exhibited during the Design Miami fair, which runs from 2 to 6 December 2015 next to the Miami Beach Convention Centre, where Art Basel Miami Beach will take place simultaneously.

Earlier this year, Seletti launched a garden furniture range by Studio Job that was designed to reinterpret "hyper-kitschy" cast-iron outdoor chairs and tables.

The brand previously released a dish rack modelled on Midtown Manhattan and a collection of hanging lamps made from the same coarse paper used for egg boxes.