Opinion: KPF's attempt to recreate the allure of a red Porsche on the facade of Los Angeles automotive museum has left us with an eyesore, says Mimi Zeiger. But can it teach us anything about our architectural now?

The Petersen Automotive Museum only reopened yesterday, but connoisseurs of Wilshire Boulevard architecture have been jawing about the eye-popping facade for months. Ever since a carapace of red steel ribbons started to appear, bending around the corner of Fairfax and arcing over the roof of the former Seibu department store, the structure designed by Kohn Pederson Fox has drawn pointed criticism.

And ever since red LED lights were installed along the edge of each ribbon, turning every component of the facade into an undercarriage worthy of a Vin Diesel vehicle, we can add "traffic hazard" to the list. But is it enough to point out the offensive and offer revved up reproach – a model of critique custom-made for our digital lives? After the retorts cool, the museum opens, and we have to live with the eyesore, one wonders if KFP's design offers any lessons for our architectural now?

If the streamlined corner brings to mind the details of a cherry '57 Chevy, you've caught their general drift

The Petersen isn't a good building. It is barely a building at all – although it comes with a whopping $125 million (£84 million) price tag – but rather a western-town front posing as architecture. While one might want to make some Learning from Las Vegas comparisons at this point, let's set aside the decorated shed motif for a moment. The Petersen Automotive Museum board is made up of men who love fast cars. At a press event held during construction, the allure of a red Porsche was evoked more than once. Fittingly, the designers suggested that the facade is a portmanteau of chrome curves, aerodynamic analogies, and hot-rod quotations culled from across automotive history. If the streamlined corner at Fairfax and Wilshire brings to mind the details of a cherry '57 Chevy, you've caught their general drift. The building is not building, but Car. Capital C, in order to underscore that this is all automobiles – the collective imagination of a century of styling. All your car cultures belong to us. 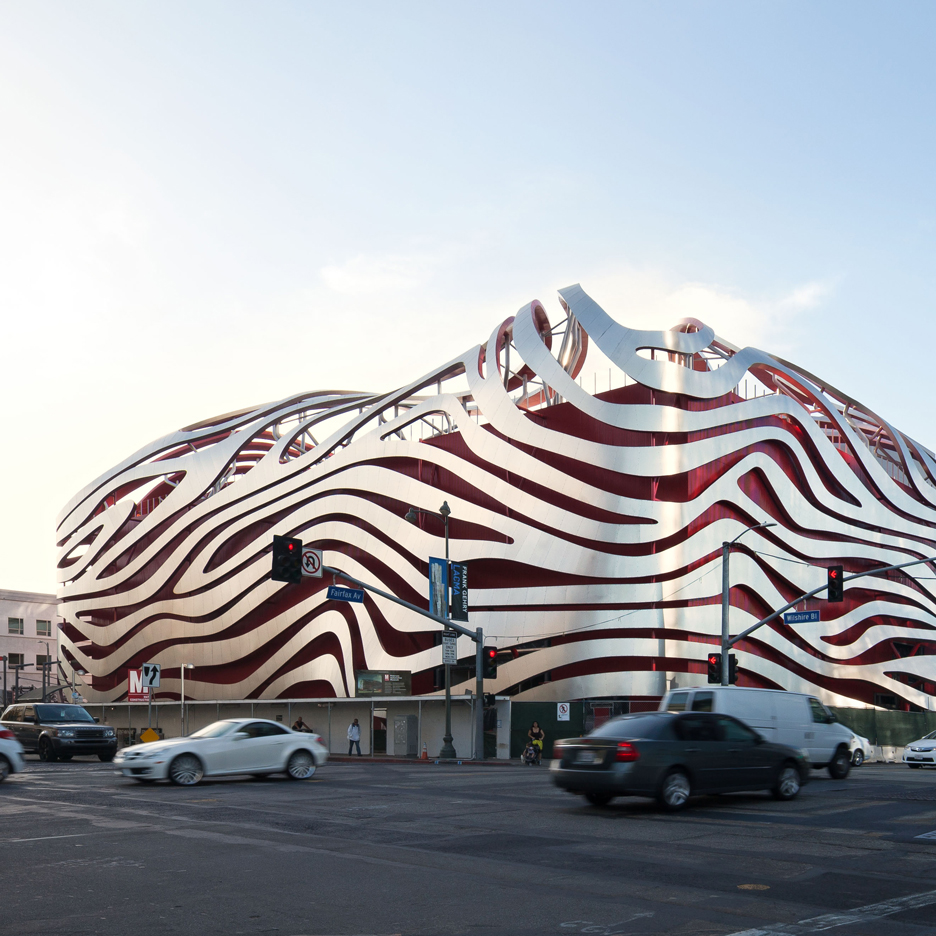 The problem is that in dabbling in Postmodern pastiche, the designers behind Petersen assemblage have accidentally produced a reasonable facsimile of computational design. However, this is not exercise in parametrics; according to KPF, the suggestive curves and airflow pattern began as analogue sketches that were then transferred to Rhino. Expert fabricators Zahner and contractor Matt Construction – both known for their realisations of complex architecture – ensured that the museum facade would be at the calibre of Morphosis' Emerson College or Diller Scofidio + Renfro's Broad museum. We are left with a design that approximates a more sophisticated logic, but is not equipped with – was never meant to be equipped with – the chops to deliver.

The inherent disappointment of this design as an icon and its contribution to the urban realm along Miracle Mile is not a surprise. This stretch of Wishire Boulevard is cursed to be half-baked: the unresolved Zumthor scheme for LACMA or Piano's ovoid Academy Museum of Motion Pictures (not to mention the architect's lacklustre additions to the LACMA campus). The Petersen's closest cousin is a Googie, Johnie's Coffee Shop – circus striped and covered in light bulbs.

Lingering behind the slur of "bad" or "ugly" or "trash" is a broken promise of architectural authenticity. That alliterative compound is at the root of lay and professional criticism whether we like it our not. No matter how avant or viral, how laden with post-critical irony or Neo-Pomo sincerity, there is always the old-fashioned expectation, perhaps indebted to Ruskin, Wagner, or the Bauhaus' mystics, that design through its Vitruvian values will elevate us from the ordinary, not rub our noses in it.

In Reyner Banham's Vehicles of Desire, a 1955 essay written early in his career and published first in Art and republished in the collection A Critic Writes, the critic wrestles with this gulf – on paper it is gap between the high art of architecture and the low of automobile design. For us it is all about the "image" of architecture – its coherence and comprehension – something Banham discusses a few months later in his era-defining piece The New Brutalism as he parses the transmutations between sloganeering, building, and architecture.

Reading Vehicles of Desire 60 years later, the details have changed, but certain sentiments he identifies remain entrenched. He writes: "We eagerly consume noisy ephemeridae, here with a bang today, gone without a whimper tomorrow – movies, beachwear, pulp magazines, this morning's headlines and tomorrow's TV programmes – yet we insist on aesthetic and moral standards hitched to permanency, durability and perennity."

You'd think by now that we'd have a "post-internet" way of better arbitrating an essentially flat culture. Something that goes beyond what we all know: that an aggregation of likes confers approval and headlines shout dissent. Banham saw the hyper-styled 1950s automobile as a MacGuffin of sorts, a narrative object used to move the design discourses of the day away from the timeless and to the timely. He closes the essay with the line that speaks to design itself as an expanded critical vocabulary. "Arbiter and interpreter between the industry and the consumer, the body-stylist deploys, not a farrage of meaninglessness ornament, as art critics insist, but a means of saying something breathless, but unverbalisable, consequence to the live culture of the Technological Century."

While the Petersen is no great piece of architecture, could it be our MacGuffin? Exuberant in expression, thin in content, Kardashian-like it asks for attention, good or bad. It's ugly in its zealous attempts at image, at architecture. However, in a perverse reversal, I think our young contemporary century may desire ugliness over beauty.

A reflection on loveliness is a solo act, or at most shared between two lovers in purple prose. The abject is collective. It brings people together in shared disgust. Given the distributed state of architecture culture, ugly might be our saving grace.