The Tower of London's famous resident ravens have a new home in a set of oak and mesh-encased aviaries designed by local firm Llowarch Llowarch Architects (+ slideshow).

The enclosures are installed in the grounds of the Tower, and replace the "ad hoc collection of sheds" the birds had previously inhabited.

According to English legend, if the six resident ravens leave the Tower of London the kingdom will fall. The birds became protected inhabitants of the historic royal palace, fortress and prison during the reign of Charles II.

Despite having one of their wings clipped, the odd raven does occasionally leave and some have even been sacked from their official role due to bad behaviour, like eating television aerials.

The 46-square-metre set of four conjoined aviaries were designed to improve the animal's wellbeing, and the studio worked closely with the Tower of London's Ravenmaster and the Curator of Birds at London Zoo.

The firm also needed to design structures that would take into account the Tower complex's UNESCO World Heritage Site status, and maintain visitor's views of the historic backdrop, which is now overlooked by Rafael Viñoly's Walkie Talkie skyscraper. 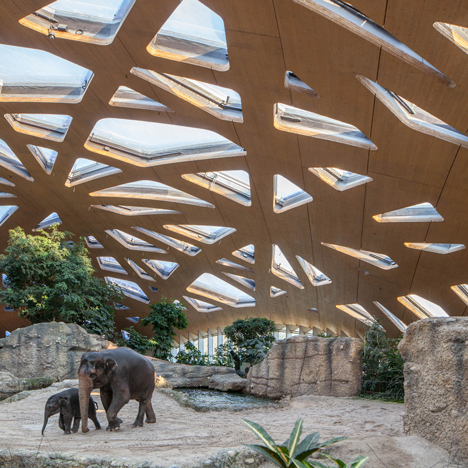 To this end, the enclosures are covered in a fine stainless steel mesh and have transparent rear sliding doors. Vertical slats of oak separate the aviaries and create sleeping boxes for the ravens, and the wood also forms a deck installed for workshops and educational talks.

The palace is best known for its iconic stone White Tower, originally built by the Normans after the invasion of 1066 as a fortified castle keep and later made famous as a royal prison, which lends the palace its name.

But the architects chose oak to reference other elements of the place complex's architectural history, with timber structures believed to have occupied the site in the 13th century.

Openings at the rear of the enclosures allow ravens to come and go, as they have free roam of the Tower during the day. At night they are closed for the birds' protection.

"The enclosures protect younger birds being introduced to the established 'conspiracy' of ravens, and provide protection to older birds," said Llowarch Llowarch Architects, which has worked on a range of cultural and residential projects.

The roof of the enclosures is also visible from the Tower's Wall Walk, along the top of the outer defensive walls of the complex, and is designed so that its height continues in line with the plateau of the lawn.

The Tower of London has previously hosted an installation of thousands of ceramic poppies to mark the centenary of the first world war, while a timber-clad cafe designed as an upside-down interpretation of the historic palace was installed nearby.

Other design for animals includes Next Architects' Batbridge in South Holland, designed to include roosting spaces, and a trio of larch-ribbed structures for a petting zoo in Germany by Kresings Architektur.