The wooden desk accessories in this collection by Russian designers Nasya ​Kopteva ​and Sasha​ Braulov​ are based on architectural landmarks in their home country, including Melnikov House and the Red Banner Textile Factory (+ slideshow).

Items in the Russian Avant-Garde Desktop Organiser collection are made from solid oak sourced as leftovers from a carpentry workshop.

They correspond with iconic structures from the influential Russian Avant-Garde period, which began as an art movement in the late 19th century and continued with architecture well into the 1930s.

The first is a magnetic paper-clip holder modelled on the double-drum shape of the Melnikov House, designed by architect and artist Konstantin Melnikov for himself in the 1920s. In 2013, heritage experts warned that the building was at risk of collapse, prompting a campaign from international architects to save it. 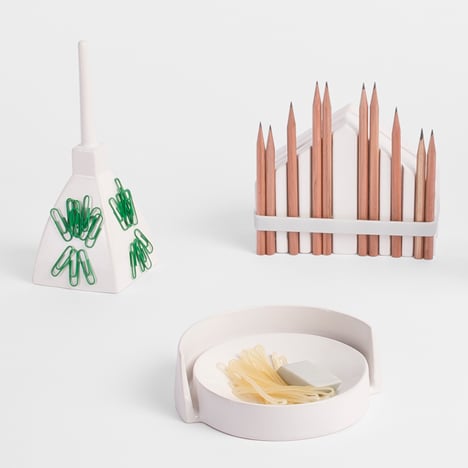 Post-it notes can be stored in one of the pitched sides of a block designed to mimic the Bakhmetevsky Bus Garage, also designed by Melnikov with Vladimir Shukhov.

A combined pencil sharpener and business-card holder is based on St Petersburg's Communication Industry Workers' Palace of Culture, designed by P M Grinberg and G S Raitz, and completed in 1939.

The taller of the building's two main sections holds the metal sharpener, which is set into an indented section of an otherwise curved edge. A wide groove in the top of the lower portion is sized to neatly store business cards.

The tapered chimney of German architect Erich Mendelsohn's 1928 Red Banner Textile Factory in St Petersburg is turned into a ruler, while the circular shape of Moscow's 1930 Round Bath House becomes a tape dispenser.

Two different roof shapes from Moscow's 1930 Communal House of the Textile Institute – also known as Nikolaev's House, after its architect – informed the profiles of a smartphone docking station and a pen holder.

An eraser replicates the protruding rectangular section of the 1935 Moscow Raysoviet building, while the rest of its cylindrical form is made in wood.

Architecture has also provided the shapes for desk tidies by Andrea Rekalidis, who based her ceramic set on Italian landmarks, while Klemens Schillingger used ancient Greek and Mayan structures as an influence for his concrete tabletop accessories.