When the time came to create a video to accompany Wide Open – featuring vocals by Beck – Tom Rowlands and Ed Simons AKA The Chemical Brothers turned to long-time collaborators Dom&Nic.

"We have been working with The Chemical Brothers for 20 years," said the directors, whose full names are Dominic Hawley and Nic Goffey. "They originally approached us to make a video for Setting Sun in 1996 and we have made eight videos now for them in total."

Like for all of the previous films, the brief was simply to "make a great film for the music".

In this instance, the duo turned to dance as a focal point of the video, but included an unusual twist. 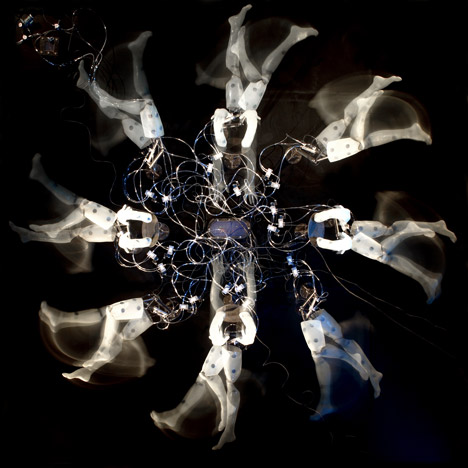 "We really conceived this video as a dance film," Dom&Nic told Dezeen. "We wanted to make a piece of dance that could only exist on film and couldn't be experienced live."

The clip follows a single dancer as she performs a routine around an empty space, which looks like a disused warehouse and is dotted with concrete columns.

As the camera pans in and out of her body while she moves, her limbs are replaced one-by-one with white latticed versions – similar to the 3D-printed cast designed for fractured bones back in 2013.

"The song is about loss and change, so the idea that the woman changes from flesh and blood to a 3D-printed lattice reflects this change, and subsequent loss of her old self," Dom&Nic said.

A lot of time was spent on the visual effects, created by The Mill, which involved merging the actions of the dancer with a 3D digital model.

"There was also a lot of work to create the clean background that you can see through the lattice work body," said the directors.

The film took just under five months to make, with post-production accounting for around 14 weeks.

Wide Open is taken from The Chemical Brothers' eighth album Born in the Echoes, released in July 2015.