Sibling's designers Cozette McCreery and Sid Bryan aimed to bring "a bit of sparkle" to daily life, so used metallic lurex yarns to form a collection of nightclubbing attire.

A major influence for the collection was Jamaican-born singer and renowned wild performer Grace Jones. Jones was a regular fixture on New York's disco scene during the 1980s, and also inadvertently became a poster child for Postmodernism wearing maternity clothes designed for her by Jean-Paul Goude. 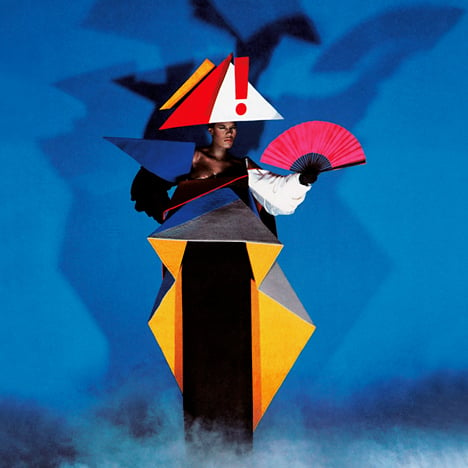 "Jones is thought of as much for her night-time prowling as her music, and so looks take many of their cues from the nightclub," said Sibling's show notes.

Lilac and blue colours throughout the collection referenced the hues of Jones' 1977 Portfolio album artwork.

"The lilac Party Girl cardigan with hand-sewn sequin trims epitomises this, alongside hooded fine knitted lace playsuits – these being perhaps the most Jones pieces," Sibling said.

A statement garment had a "dangerously" low-cut neckline surrounded by a black tinsel, which wrapped over the head like a hood. Its arms and back were knitted from a thick purple wool.

Sibling has become well-known for its knitwear, and has used it to create stand-out pieces in both its men's and women's collections since the brand was founded in 2008.

Examples include the colourful crocheted flowers used for Autumn Winter 2013 womenswear and the "anti-culture uniforms" produced for Spring Summer 2015 menswear.

As well as Jones, other cultural influences for the brand's previous collections have included artist Richard Woods and designer Verner Panton.

Another knitted jumper in the Autumn Winter 2016 collection featured a black upper half and a lower portion in "NYC taxi" yellow. The colours meet along a jagged line that Sibling suggests could be interpreted as Manhattan's skyline.

Models that sported the see-through lace catsuits wore stars over their nipples, as did those whose metallic tops scooped down to their waists or whose jackets were left undone. 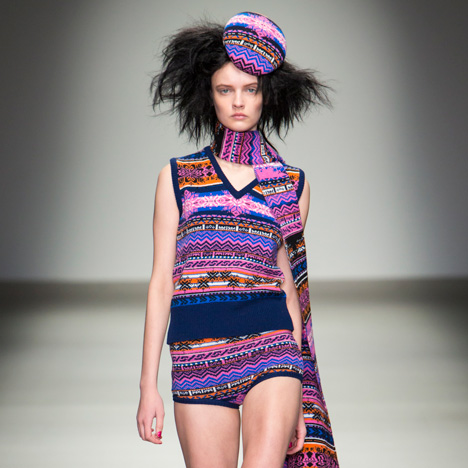 The brand's signature leopard print appeared subtly as black sequin patterns on the same-coloured fabric and on belt ties for cardigans.

A chevron jacquard weave used for a gown was influenced by a textile from The Geffrye Museum of the home in east London, not far from where Sibling's studio is based.

Chunky knitted shrugs and capes were fringed with more of the tinsel-like material, but some were carried rather than worn.

Some outfits were accessorised with soft oversized headphones, while others were completed with lurex-covered helmets. Models also wore single pom-pom ear rings and leopard-print socks embellished with tassels.

Sibling's catwalk show took place yesterday at Brewer Street Car Park in Soho – the main venue for this edition of the biannual fashion showcase in the UK capital, which runs from 19 to 23 February 2016.

Metallic textiles were also a dominant feature of the Autumn Winter 2016 collection by Sadie Williams, who put a spin on vintage winter-sports attire for her London Fashion Week presentation on Friday.