Circular "peek holes" pierce the flanks of this observation tower by Dorte Mandrup Arkitekter, to reference the portholes of ships and offer views over Aarhus harbour (+ slideshow).

The Copenhagen-based studio designed The Salling Tower as a "dramatic urban sculpture" to provide a focal point and meeting place for visitors to the Danish city port.

The white perforated steel structure has two viewing platforms. One angles out over the water, giving the volume an arrow-shaped profile, while the second is stationed at the top, 7.5 metres above the quay.

"Despite the distinctive appearance, the tower contributes to the historic trading port by referencing the maritime environment," explained the architects. 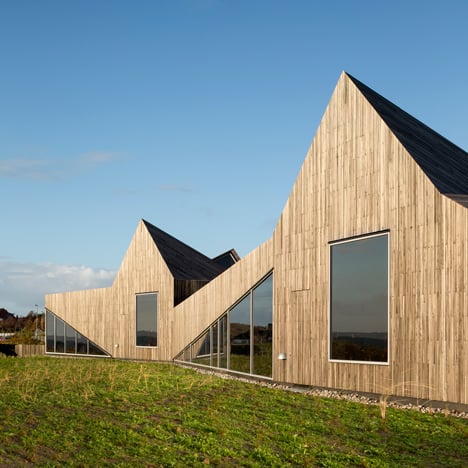 "Peek holes and a massive white painted steel-plate construction promote the feeling of being at sea."

A flight of stairs leads from the quayside to the first viewing platform before fanning out and upwards like stadium seating to the second plateau.

This top platform is partially sheltered by a perforated metal canopy, and gives 360-degree-views of the city and harbour.

LED lights illuminate the tower from within at night, and are intended to be reminiscent of the mast lights of cargo ships.

The observation tower also has a lift, making it possible for visitors with reduced mobility to access the platforms.

Prior to designing The Salling Tower, Dorte Mandrup Arkitekter completed a dune-inspired kindergarten with a jagged timber form in Sweden and converted a Copenhagen dance hall into offices for the Association of Danish Law Firms.

The studio was commissioned to design the tower as a gift to the city form the Danish bank, Salling Funds.

Aarhus, Denmark's second largest city, is undergoing considerable redevelopment – particularly around its harbour. One of its most significant schemes is a waterside development modelled on a cluster of floating icebergs, designed by a team of architects including JDS and CEBRA.

Other recent proposals for the city include a scheme by BIG including a waterside theatre, swimming baths, beach huts and maritime allotments, and a residential tower by 3XN that aims to rival the height of the city's cathedral.