To create this set of tableware, designers Allegra Santis and Anna Groet moulded body parts from a flesh-like material they call "booger" (+ slideshow).

American designer Santis teamed up with Dutch designer Anna Groet – who she met while studying at the Royal Academy of Art in The Hague –  to produce the Yomi range for serving sushi.

The idea stemmed from Groet's time in Japan, where she became inspired by Japanese mythology and the art of sushi.

"We knew we wanted a strong cultural influence in the atmosphere of the project," said the designers.

"The name of the project 'Yomi' also gave us the idea of setting up a scene of new souls eating at the table before continuing on their journey to the underworld."

Each of the pieces are made from what the designers call "booger" – a soft material formed from gelatin, glycerin and water which feels warm and fleshy to the touch.

"It's called 'booger' because our teacher has a sense of humour, and when it's melted in its natural colour it looks like mucus," Santis told Dezeen. 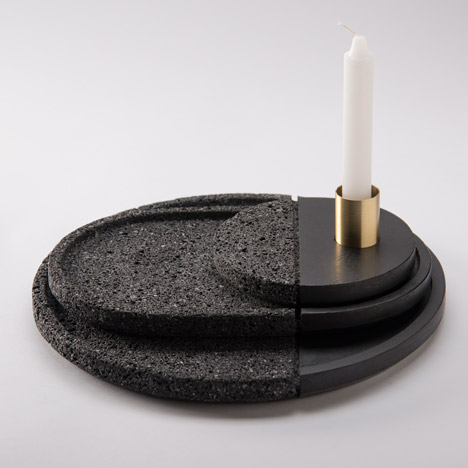 "The great thing about the material is that it's biodegradable and reusable – it can be reheated and used again without losing structural integrity."

As well as a standard bowl shape, moulds were cast from various body parts including a breast, foot and buttocks.

Once the material had set in the shape of each mould, it was added to the top of a black-painted plinth.

Each of the body parts serves a different purpose; the foot becomes a teapot, the hand serves as a plate, the ear is a soy sauce dipping dish, the mouth and chin form a resting place for ginger, the stomach and bum hold the main dishes, a breast creates a bowl for soup, and the nose provides a tea cup.

Diners are invited to pick up each piece by hand from the stomach and buttocks – gradually revealing the shape underneath.

"The user feels an uneasy connection to the tableware as certain body parts are revealed while eating, and as the tableware is handled, it feels fleshy and warms to the touch, essentially coming alive," said the designers.

"This project creates a new connection to the food we eat and resets our perception of what we normally take for granted by making a new ritual in the act of dining," they added.

As part of the project, Santis photographed and edited the results in the style of early 20th-century Japanese photographs. This gives them a grainy, sepia-like appearance.

Food is increasingly becoming a territory explored by designers. Projects range from real applications – including protein bars made from powered crickets and edible fungi that digests plastic as it grows – to a synthetic biology proposal that involves altering the human digestive system so it can digest rotten food.

Photography is by Allegra Santis.