Glas Italia contributed to the growing trend for coloured glass furniture in Milan this year, adding to products from its range last year such as frosted glass tables with coloured edges by Nendo and a series of iridescent furniture by Patricia Urquiola.

As part of the trend, Urquiola also showed a cabinet with stained glass doors, while Ini Archibong presented tables with coloured, blown-glass legs.

Glas Italia's launches this year are based around the concept of illusion; using glass that is mirrored, coloured and moulded to play with the senses.

Prism, a mirrored dividing screen by Japanese designer Tokujin Yoshioka, is one of the stand out pieces from the 2016 collection.

A hand-curved surface is peppered with imperfections, ripples and curves that create distorted, mirage-like reflections.

Adding again to the collection, Tokyo studio Nendo has created the Layers bookshelf which features hanging panels of coloured glass. 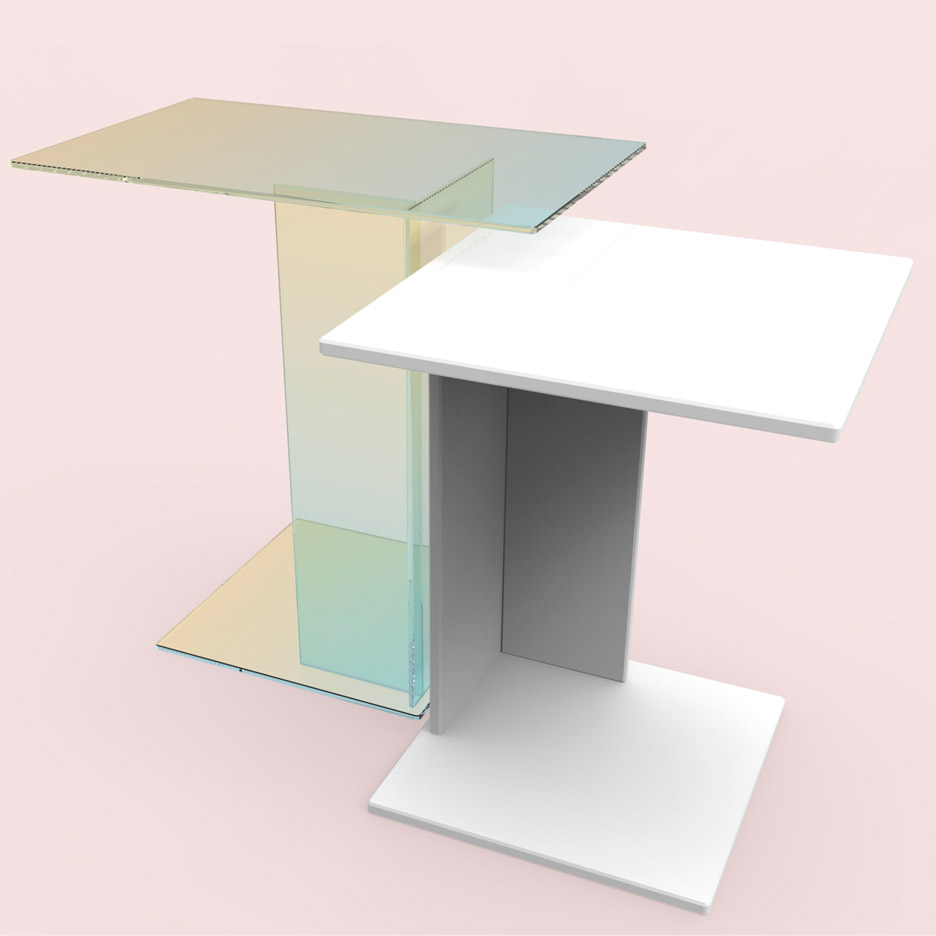 Different panes can be moved so they overlap, combining colours to create a shifting, patterned composition.

Italian designer Piero Lissoni has created two items for the series. Sherazade is a glass door that is embedded with cloth-like patterning to provide privacy.

He has also made a set of storage cabinets, called Commodore. The units are panelled in ridged or chequered glass which distorts the view of the inside.

Japanese designer Naoto Fukasawa has contributed Narcissus, named after the hunter from Greek Mythology who fell in love with his own image reflected in a pool of water.

In the piece two mirrored panes are separated by a distorted glass cylinder that is meant to resemble flowing liquid. The table gets its name from the reflections that play between the two surfaces.

French duo Ronan and Erwan Bouroullec have made a table for the range which has with a thick glass top.

Both the colours of the top and the legs can be individually chosen. The solid top is then poured around the legs "welding" the piece together.

The tapered table-top sits on delicate-looking legs, which are made out of mouth-blown borosilicate glass – a lightweight type of glass typically used in laboratories.

Additionally London duo Barber Osgerby have made a larger storage cabinet for their series called Collector. The cabinet has rounded glass corners and sits of a black, tapering plinth of ash wood.

Urquiola has also contributed new pieces to her Shimmer collection with frosted versions of the previous tables and mirrors.

Other furniture collections released during this year's Milan design week, which took place from 12 to 17 April 2016, include a set of architect-designed pieces that features a shelving system by the late Zaha Hadid. Italian brand Magis also lunched a furniture and accessories range to celebrate its 40th anniversary.