Competition: London-based designer Phil Cuttance has teamed up with Dezeen to give one reader a handmade vase, featuring a raised herringbone pattern.

Congratulations to the winner! Nathan Cole from the UK.

Each of Cuttance's Herringbone vases has been cast by hand, using a series of moulds in a process that is a development from the designer's 2012 Faceture vases.

"The Herringbone vases are a result of my continued interest in creating visually complex three dimensional forms, in a handmade way," said the designer.

To create the shape of the vases, the designer created a master mould by pouring resin into a flat casing, featuring a pleated pattern to produce the herringbone relief. As the resin dried, the mould was folded up to form the shape of the three-sided vase.

"I first scored a flat plastic sheet and then folded it, like origami, to create the raised herringbone relief," Cuttance told Dezeen. "This is used as a flat mould."

The final vases are cast in cement, which is coloured with pigments to create a red, granite, blue or sage finish. 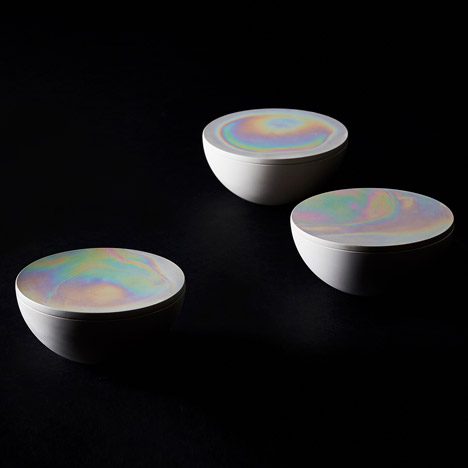 Once dried, each cast is etched to enhance the cement texture on the outer surface. Cuttance makes all of the homeware products in his studio in London, branding each one with a number on its cork base.

"On closer inspection the objects often reveal small imperfections, which are a result of the process and communicate the hand-made nature of the piece," said the designer.

Other hand-cast products by Phil Cuttance include candle holders, an addition to his faceted vase collection, and resin pots that have lids with a unique iridescent sheen.

The Herringbone vases debuted at Makers and Bakers, a restaurant installation curated by Ambra Medda for Airbnb during this year's Milan design week, which ran from 12 to 17 April.

The winner will have the choice of one Herringbone vase from the collection.

This competition is now closed. One winner will be selected at random and notified by email, and their name will be published at the top of this page. Dezeen competitions are international and entries are accepted from readers in any country.