Business news: American furniture brand Emeco has accepted an out-of-court settlement from IKEA after accusing the Swedish giant of copying the design of one of its chairs.

The details of the deal remain confidential but both companies said they were happy with the outcome.

The agreement makes clear that Emeco owns the intellectual property rights to the 20-06 chair, which was designed by Foster in 2006.

"The dispute has been resolved," Emeco chairman Gregg Buchbinder told Dezeen, but he declined to give further details.

Emeco had claimed that IKEA's stacking Melltorp dining chair was "very, very similar" to its own product, and filed a design right and copyright infringement case against the Swedish giant last year.

"Emeco is the intellectual property rights owner of the 20-06 chair designed by Norman Foster," the joint statement said.

"In October 2014, Emeco filed a civil law suit against IKEA for alleged design and copyright infringement of the 20-06 chair," it continued. 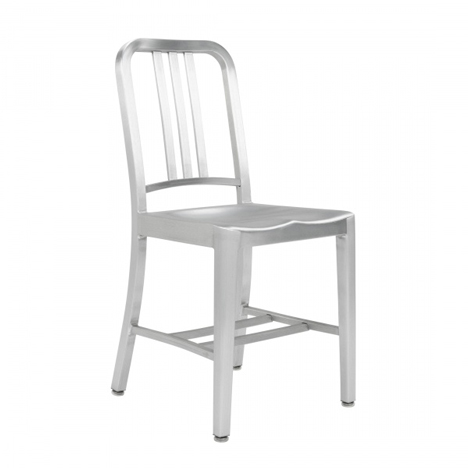 "IKEA disagreed to the claim but the companies have been in fruitful discussions and an agreement has now been reached outside of court. Both parties are satisfied with the outcome. The details of the agreement are confidential."

IKEA's stacking Melltorp chair, designed by Ola Wihlborg, features a powder-coated steel frame and a polypropylene seat and backrest. It weights 5.6kg and retails for £20 in the UK.

The Melltorp chair is currently still on sale on IKEA's UK website. IKEA refused to comment further or say whether they chair would now be withdrawn from sale.

The settlement is the latest victory for Emeco, which has resorted to legal action to protect its designs on several occasions in the past.

The following year, Pennsylvania-based Emeco settled with two more furniture companies that it had accused of copying the Navy chair and the Philippe Starck-designed Kong chair.

In the same year home-rental brand Airbnb removed a set of aluminium chairs from its San Francisco headquarters after Emeco pointed out they were fake Navy chairs.

In a video interview with Dezeen in 2013, Emeco's Buchbinder expressed his frustration at firms that copied his products.

"In today's marketplace people are looking for economical things, and I understand that and there's a market for that," he said. "It's something that, as a manufacturer that puts a lot of time and effort into the development and research and everything else, is a very hard thing to swallow."

More on copying and copyright