Dezeen promotion: a weathering-steel temple, marble-patterned tables and a pivoting glass door are among the 18 winners of this year's AZ Awards for architecture and design (+ slideshow).

A jury that included Chris Wilkinson of British architecture firm Wilkinson Eyre and Thomas L Woltz of US studio Nelson Byrd Woltz selected 66 finalists from 826 submissions from 52 countries. before choosing the 18 winners. 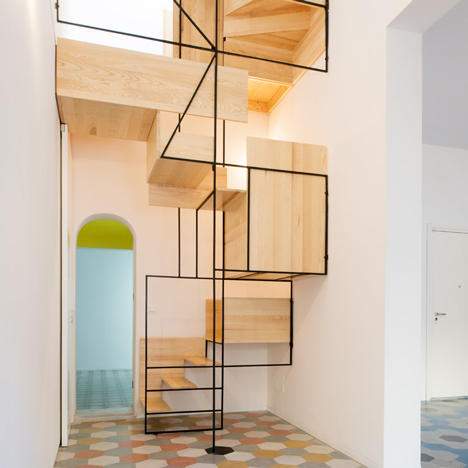 Each winner received a trophy designed by Omer Arbel of Vancouver glass brand Bocci, who was also a member of this year's jury. The full list of winning projects, including the 66 shortlisted finalists, is available on the AZ Awards website.

Read on for more information from Azure:

The AZ Awards, Azure's annual international competition that recognises the very best in design and architecture, received a phenomenal 826 submissions from 52 countries for its 2016 edition. From that impressive number, 18 winners have been selected.

Elite players from the international architectural and design community, some from as far away as Belgium and China, came together at Toronto's historic Evergreen Brick Works as Azure revealed the winners of its sixth annual AZ Awards. Along with the accolades, the established and emerging talents walked away with a stunning trophy designed by Omer Arbel of Vancouver's Bocci, and member of this year's distinguished jury.

Now in its sixth year, the AZ Awards – Canada's only international, multi-disciplinary design competition – is recognised for attracting top players in the fields of architecture and design.

Open to designers, architects, firms, manufacturers and students, the AZ Awards programme cultivates the most innovative, dynamic and thought-provoking projects and products from across the globe.

Earlier this spring, the distinguished panel met in Toronto to vet, debate and draft a shortlist of 66 finalists from the 826 contenders. From there, they selected the 18 ultimate winners.

In April, following the announcement of the finalists, the public was invited to vote online for their favourites as the People's Choice. To view the full list of 18 jury winners, 66 finalists and People's Choice winners, visit azuremagazine.com.