World Heritage Corb: Le Corbusier's Unité d'Habitation in Marseille is one of French-Swiss architect's most recognised buildings, and is the last in our series exploring the 17 of his projects added to UNESCO's World Heritage List (+ slideshow).

The apartment complex in the French city – also known as Cité Radieuse – is the first of the architect's experimental developments created across Europe.

Widespread destruction during the second world war triggered an urgent need for accommodation in France, and Le Corbusier was commissioned by the government to "demonstrate a new art of building to transform housing".

The architect, whose vanguard designs interpreted the house as a "machine for living", took on the challenge with enthusiasm. The building he envisioned would act as a vertical city encompassing every human need.

He had already devised other large-scale housing schemes. For this project, he combined many of the principles used in his previous buildings.

For example, his 1932 Immeuble Clarté, in Geneva, features a double-loaded corridor system used to access the apartments. A similar system was employed in the Cité Radieuse, in which a single corridor serves four floors. 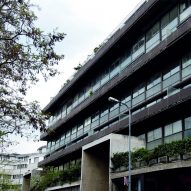 This strategy was used in earlier factory designs, where cost efficiency was paramount. For example, the Claude et Duval Hoisery in Saint-Dié, France was also built with rough concrete "béton brut" – which informed the term Brutalism used to define this style of architecture.

Other features, such as the rooftop terrace reserved for outdoor activities and the ground plane raised on pilotis, were featured in most of Le Corbusier's designs prior to the Unité d'Habitation.

They can be observed in many projects, from the iconic Villa Savoye to lesser-known buildings like the Cité Frugès worker's housing outside Bordeaux.

Ultimately, the Marseille project embodied all of the architect's ideas about design, and served as an example of a new housing typology. Le Corbusier would go on to build five other housing units based on this template, in Nantes-Rezé, Berlin, Briey and Firminy.

Other Le Corbusier projects that were added last month to UNESCO's World Heritage list include the Ronchamp Chapel, which features curved lines and a swooping roof, and a house in Argentina that the architect designed without ever visiting the site.

Photography is by Catrina Beevor.