With interest in mid-century furniture showing no signs of slowing, 2016 has seen a boom in design reissues, from the pioneering creations of the Danish modernists to the icons of Le Corbusier. For our review of the year, deputy editor Rima Sabina Aouf has selected 10 of the best.

Le Corbusier, one of the most important pioneers of modernist architecture, originally created the Borne Beton lamp in 1952 to illuminate walkways at his Unité d'habitation de Marseille.

Italian lighting design firm Nemo reissued the lamp in 2016, making it available in both a large outdoor version and a smaller desktop size.

Italian furniture brand Cappellini claimed it was rescuing Joe Colombo's Tube Chair from the pages of design books when it rereleased the piece earlier this year.

Originally produced by Flexform in 1969, the chair has an ultramodern design and flexible modular construction that led Cappellini to see a place for it in contemporary interiors.

Read more about the Tube Chair ›

Danish modernist Arne Vodder is usually known for his work with wood, but this 1972 chaise longue was his first use of a metal frame.

Furniture brand Erik Jørgensen has now rereleased the AV72, which has a slimline shape that follows the natural contours of the body.

Read more about the AV72 chair ›

Influential Danish designer Poul Kjærholm first created these tables in 1955 for classrooms at the Royal Danish Academy of Fine Arts, where he lectured.

It was among a number of designs to be rereleased in 2016 by Carl Hansen & Søn, which launched several variants of the desk, including options with a single drawer and square side table.

Read more about the PK52 desk ›

While Cappellini reissued one of Italian industrial designer Joe Colombo's most iconic pieces, the Tube Chair, Danish design brand Karakter could not stop at just one item.

It released several of Colombo's "futuristic" designs, including the gently smiling Chair 300, the cubic Pouf stool and the arched Domo wall light.

Another product to be reissued this year by Carl Hansen & Søn is Danish designer Hans J Wegner's CH22 lounge chair – one of the first pieces the designer created for the furniture company.

The CH22 lounge chair was first released in 1950, alongside the more iconic CH24 – also known as the Wishbone chair or the Y Chair.

Furniture manufacturer Onecollection relaunched this 1956 chair, which played an important role in the proliferation of Danish design.

Finn Juhl originally created the FJ 136 chair for British entrepreneur C W F France, whose business strategy was to develop high-quality furniture for export that could be produced at an industrial scale and flat-packed.

New brand 366 Concept is rereleasing Polish-designed chairs that were once a common sight in the living rooms of the formerly Soviet Bloc country.

The brand began making the 366 easy chair – designed by Józef Chierowski in 1962 – two years ago, and this year added a second classic design, the Bunny chair, whose legs meet in an inverted, rabbit-ear-like "V".

Read more about the Bunny chair ›

My Own Chair by Flemming Lassen

Danish architect Flemming Lassen only created one of these chairs back in 1938, when it was made for the yearly Cabinetmakers Guild Exhibition in Copenhagen. It subsequently sat in the architect's home

Now By Lassen has released the chair, which features a separate winged back and seat that the brand says was "considered too progressive, even for the modernists of the time, to be put into production".

Read more about My Own Chair ›

While not technically a reissue — a white version of Danish designer Verner Panton's 1971 Panthella floor lamp has been in steady production — this year saw lighting manufacturer Louis Poulsen introduce a mini desktop model.

It may be shrunken in size, but the Panthella Mini fulfils a hitherto unrealised part of Panton's original design, using a shade made of metal instead of acrylic. 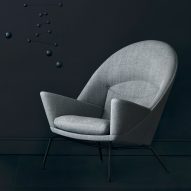