From tiny mountain cabins to vast modernist-influenced beach villas, US editor Dan Howarth has selected the 10 best American houses of 2016, as we continue our year in review.

US firm MW Works created this holiday home with ample glazing and natural materials, helping it blend with its picturesque surroundings.

Located in northern Washington, the Case Inlet Retreat is nestled into a forested hillside and is named after the body of water it overlooks.

Ex of In House, New York, by Steven Holl

Three-dimensional shapes are cut out from areas of this artist residence in Upstate New York by Steven Holl Architects, which claims the house can sleep five guests despite having "zero bedrooms".

The geometry of the 918-square-foot property comprises a series of spheres that intersect the main trapezoid volumes, forming a dramatic entrance hall and a large feature window on one corner of the upper floor.

Read more about Ex of In House ›

Landes, who briefly swapped movies for architecture, envisioned the house as a "framework for living" with seven bedrooms distributed across three storeys.

A long cypress-clad volume that projects from a hillside in rural Massachusetts forms this home, designed by US studio O'Neill Rose Architects for a nature-loving couple.

The architects "took a simple house to the extreme" in order to strengthen the building's relationship to its picturesque setting.

This zinc-clad home by US studio Wendell Burnette Architects sits in the middle of a Wisconsin crop field.

The 5,000-square-foot Prairie House is a simple two-storey box clad in galvanised zinc, which stands alone on the flat plain – so its metallic form is visible from afar.

US architecture firm Carney Logan Burke nested this home on a rugged Wyoming mountainside, next to a massive boulder.

The studio used this rock as a focal point for the layout of the two buildings, which are connected by a bridge so they wrap around the natural feature.

The scope of Mori's work consisted of updates to the home, completed by Breuer in 1951, as well as the addition of a new volume adjacent to it.

House in Trees by Anonymous Architects

Instead of chopping down a tall tree in the middle of a Los Angeles site, American studio Anonymous Architects incorporated it into this cantilevered cedar-clad residence.

A goal of the project in the city's Echo Park neighbourhood was to preserve the site's natural features, "even if it meant having a tree grow through the house".

Read more about House in Trees ›

Little House on the Ferry, Maine, by Go Logic

US design-and-build firm Go Logic has completed this summer house on the rocky coastline of Maine, made up of three wooden cabins each linked by terraced decks.

The waterside home comprises a main building with living and dining areas, and two freestanding bedroom structures – all made entirely of factory-cut cross-laminated timber (CLT) panels.

Read more about Little House on the Ferry ›

This tiny black cabin by US firm Studio Padron serves as a cosy library and guest house for a vacation home in upstate New York.

The small black hut is designed to serve as a standalone, one-room library on the property, which doubles as a place for visitors to sleep. 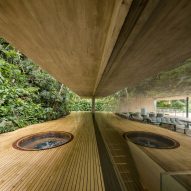