These ceramic vases by Mexico's Esrawe Studio are shaped to show the incremental stages of turning a cylindrical form inside-out.

The 19 items in the Fold homeware range form a set of vases, bowls and plates that are staggered in height and width – each slightly manipulated from the one before.

"Fold is a conceptual exercise that seeks to give an elastic expression to ceramics," said the studio, founded by designer Hector Esrawe.

"The piece becomes the physical representation of a sequence of actions; the object transforms both aesthetically and functionally."

The series starts with a simple white near-cylindrical vessel, with a gold-coloured coating inside.

When viewed in sequence, the subsequent vases are shaped so their rims appear to gradually peel down and reveal the metallic interiors.

The vessels get shorter and the rims become wider until all is left is a flat golden platter.

"The development starts with the basic shape of a cylinder to which we attach a function, eg a vase, until it metamorphoses into another object which takes the function of a plate," the studio said.

From this middle item, an inverse process is applied to return the ceramics to a vertical shape.

With the metal coating now on the outside, the forms are pulled up from their centres to create pockets of space before finally returning to an almost-perfect cylinder.

To demonstrate their incremental differences, the pieces were displayed in a row on a long thin table at Mexico City's Museo Nacional de Arte (MUNAL).

The exhibition took place during the Abierto Mexicano de Diseño, held from 19 to 23 October 2016.

Esrawe Studio was one of Dezeen's five Mexican designers and studios to watch following this year's Design Week Mexico – also in October.

Its other products range from perfume bottles created using stacked hemispheres to a collection of brass and wood lights that are controlled by sliding or pivoting elements. 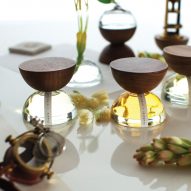 Photography is by Pablo Da Ronco.