Ferm Living combined the "decadence of bygone eras" with a minimal Danish aesthetic to create its latest collection, which launched at Maison&Objet this weekend.

The Scenes of Splendour collection was presented at Maison&Objet furniture fair, currently on in Paris until 24 January.

"The new collection acts as a prelude to dramatic moments in the midst of a serene scenery," said the Danish brand. "Situated in the calm before the storm, it is the realisation of our vision of Nordic simplicity meeting the decadence of bygone eras."

Past eras were also reflected through the use of traditional textile-making techniques, seen in new bedding collections and an outdoor rug made from upcycled threads.

Perhaps the most overt example of the idea of decadence in the collection is the Salon Cushions, which come in an eclectic mix of fabrics inspired by French salons.

The Adorn mirror, available in both wall-mounted and standing versions, makes a more modest nod to decorative periods in design, with brass detail framing its top and bottom ends. 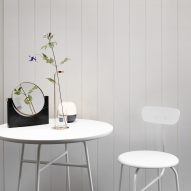 A champagne coupe features a rippling textured edge, which Ferm says adds a "contemporary dynamic" to the nostalgic collection.

Also included in the new collection are candleholders, knitted dishcloths, towels and a wall-mounted version of the glass-fronted cabinet it launched at last year's Northmodern fair.

The Scenes of Splendour collection launched at the January edition of Maison&Objet, which takes place in Paris from 20 to 24 January.

Other products launching at the fair range from a coffee table by Pinch that is based on a bentwood box associated with Shaker folklife to washing-up liquid by British designer Tom Dixon.