The Belgian fashion designer, who took the reigns at the brand in August 2016, unveiled the new insignia on Instagram earlier today.

Simons and Saville worked together to replace the upper- and lower-case text that spells the founder's name with all capitals.

The pair also moved the letters closer to one another, creating a subtle but recognisable difference.

Calvin Klein's Instagram caption described it as "a return to the spirit of the original" and "an acknowledgement of the founder and foundations of the fashion house".

Altering the ubiquitous logo, which famously adorns the elastic waistbands of Calvin Klein underwear, is bound to be a divisive move. 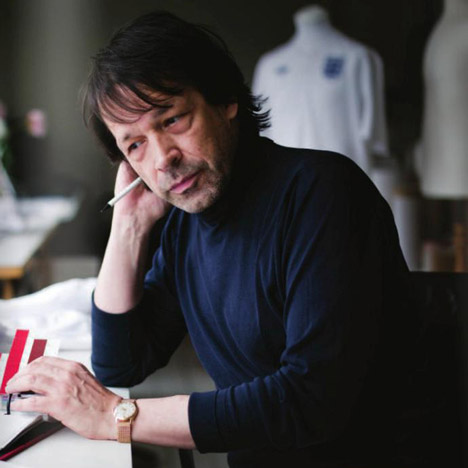 “Kanye wants me to do a YSL” - Peter Saville

Many fashion fans were upset when designer Hedi Slimane changed the Yves Saint Laurent monogram to a text logo that dropped the "Yves" in 2012, although old has crept back in since he left the label in March last year.

In 2013, Saville revealed that he was designing an identity for Kanye West, and that the rapper has asked him "to do a YSL" with the logo.

Calvin Klein has used several iterations of its minimal logo since the brand was founded in 1968. Variations include a small C and larger K in a serif typeface.

Simons joined Calvin Klein from French fashion house Dior, where he often used floral backdrops for fashion shows. The designer also has an ongoing collaboration with Adidas, for which he has created several lines of trainers.

Saville rose to fame creating album cover graphics and posters for Manchester nightclub Hacienda in the 1970s and 1980s.

He is no stranger to the fashion industry, listing brands Lacoste and Y-3 among his collaborators. The designer recently produced graphics for the extended Tate Modern art gallery in London and glassware for Manchester's Museum of Science & Industry.