Called La Charbonnière, the home is part of a housing development on a mountainside in Cap à L’Aigle, a resort village in Quebec's Charlevoix region.

The site had been cleared by the developer to provide views of the St Lawrence River – a condition that made designing the home "more complex, given the over-exposure of the land".

"The resulting monumentality of the landscape is as spectacular as it is difficult to appropriate on a residential scale," said Alain Carle Architecte, a Montreal-based studio.

"This situation is not unrelated to the long tradition of settlement in the Charlevoix region, characterised by the modest scale of the dwellings set against the immensity of the St Lawrence River and the rolling landscape."

Integrating the home into the landscape and establishing a domestic context were guiding concerns. Traditional rural complexes, rather than suburban developments, influenced the design.

Embedded in a sloped site, the home consists of sculptural volumes connected by a slender bar – all of which wrap a terrace.

One wing is single storey with a flat roof, while the other has two levels and a sloped roof.

"The exterior volumetry is abstract and intriguing," the architect said. "It emerges from the soil, like a sculptural object, facing the river's monumentality."

The 225-square-metre home was constructed using wood and steel. Exterior walls are clad in blackened wood, which was charred using a Japanese technique known as shou-sugi-ban.

"The charred cedar walls are free of windows on the side facing the road and contribute to the strangeness of this form, which divides the landscape without imposing itself," the studio said.

Black houses are becoming a trademark of Alain Carle Architecte. The firm's previous projects that feature dark exteriors include a residence comprising a cluster of blackened-wood volumes and black-painted brick house – both also in Quebec.

The interior layout of La Charbonnière is meant to feel organic, "like beautiful rural homes designed without an architect".

The entryway leads into the two-storey volume. The kitchen, dining area and living room were placed on the upper storey. The lower level houses a bedroom, game room and laundry area.

Windows set within a black grid provide sweeping views of the terrain and a strong connection to the outdoors. "The living room is designed like a contemplative retreat, opening onto the riverscape," the team said.

A slender bar, which houses a dry sauna, connects to the single-storey volume, where the architects placed a large bedroom.

Throughout the home, the team used stone flooring and white textured walls and ceilings.

"The aesthetics of the indoor spaces have a rustic stamp," the team said. "The materiality refers to our roots – more rustic than modernist, closer to the earth."

Other homes in Quebec include a countryside dwelling that steps down a hillside by MU Architecture and a black lakeside cabin with white interiors by La Shed Architecture. 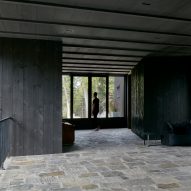