Speaking to Dezeen editor-in-chief Marcus Fairs at a talk called The Future is Now at Vienna Design Week last year, Weisshaar explored the concept of Industry 4.0, a term coined in 2014 by German industry leaders to describe networking industrial production.

"Industry 4.0 is actually a German invention," Weisshaar explains in the movie.

"It describes what happens when you connect machines to supply chains and everything else. It's the industry of the future – networked machines that talk with each other, and interact with people and other machines. The civilian version of it is called the Internet of Things. The industrial version is Industry 4.0." 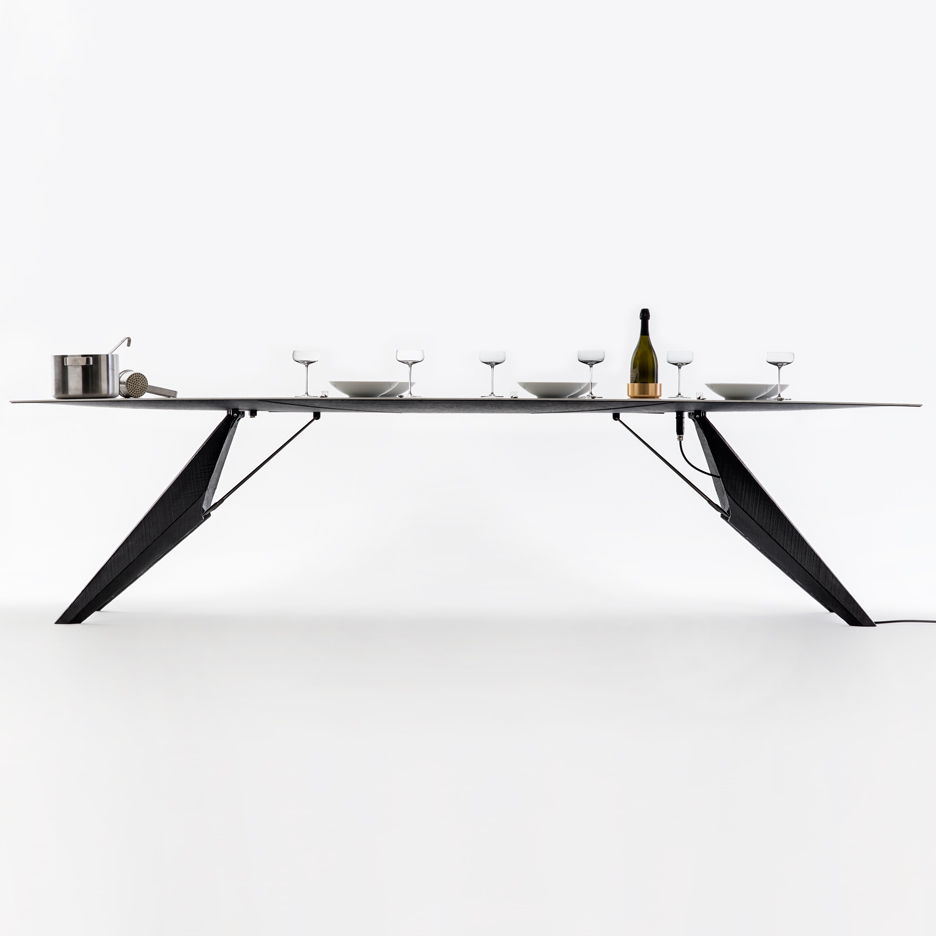 Weisshaar says that much of his work, which he undertakes together with fellow designer Reed Kram as design studio Kram/Weisshaar, explores the possibilities of these advances in industrial production.

"How do we design tools that help us design in much closer contact with machinery?" he says.

Weisshaar gives the example of Kram/Weisshaar's Breeding Tables project, first conceived in 2003, which involved creating a custom piece of software to enable the designers to create an indefinite number of different tables, which could all be industrially produced.

"Breeding Tables was about growing structures in the computer, using algorithms that actually know how manufacturing machines work," he explains.

"We programmed a CAD application that only lets you draw things that the machine afterwards can produce. It's a kind of all-encompassing tool that eliminates a lot of the obstacles along the way when you produce things."

Weisshaar and Kram wrote the Breeding Table application for themselves to use, but the duo's work also explores how access to expensive industrial machinery could be democratised.

Weisshaar gives the duo's 2010 Outrace project as an example, an installation during London Design Festival in 2010 comprising six industrial robotic arms, which visitors could program to write light messages in the air.

"We wanted to hand over control of these massive machines to the public. You could send a message to the robots by SMS or email and the robots would draw your message with these light brushes. 36 cameras around the plinth recorded these letters and if you played back those 36 images you got a scrolling message."

"That was a proof of concept that, yes you can hook up robots to the internet and yes, you can get people involved."

Kram/Weisshaar built on the concept with the studio's 2015 project Robochop, which enabled people to sculpt a foam block using a robotic arm with a wire cutter attached.

"On your phone or computer or tablet you use a 3D interface that allows you to cut foam blocks virtually. Your finger movement will be translated into robot programs and ultimately into robot movements, and you are able to manipulate a foam block."

He adds: "Somebody from industry will see this as a perfect technology demonstrator of what Industry 4.0 is. You have user input, you deliver an idea or specification through the internet to an industrial plant and ship it to the customer in the end."

However, Weisshaar says the project also highlights the potential dangers of connecting industrial robots to the internet.

"When we did Robochop, we had it up for less that one week and people tried to hack it," he says.

"They tried to drive the robots into the floor so they destroyed themselves. If everything is on the internet, everything becomes vulnerable to attack. So there's a lot of potential there, but there are also a lot of threats."

Weisshaar says that the experience shows just how important it is to build secure networks and systems.

"Even for a technology demonstrator [like Robochop], you need to put measures into place, otherwise the whole thing can spin out of control," he says. "It's all about building systems that are really safe."

The Future Is Now talk was hosted by EWO, a lighting company based in South Tyrol, Italy. Kram/Weisshaar is working with EWO to develop smart street lighting systems that can sense cars and pedestrians, and adjust the light output accordingly.

"EWO make public lighting systems that you can configure with a variety of circuit boards, high-powered LEDS and a whole range of different optics you can attach to them to build the lamp you want," Weisshaar explains.

"We added a little bit of intelligence into this system. It's basically a little computer that lives in the lamp that is able to understand what is happening under the pole this light is mounted on. If there is nobody there, you don't really need a street light."

This talk was filmed by Dezeen for EWO in Vienna.