This week on Dezeen, Turkey completed phase one of its Syrian border wall and IKEA revealed that deployment of its award-winning refugee shelters has been put on hold due to safety risks.

IKEA is redesigning its award-winning refugee shelter in response to a range of design issues, including accessibility and fire risk, Dezeen learned this week.

And, as Donald Trump prepares to build a wall between the USA and Mexico, Turkey announced the completion of a three-metre high structure along its border with Syria, which it hopes will keep out smugglers and refugees.

Former US first lady Michelle Obama spoke at the AIA conference this week, urging architects to work on more community projects in poor city neighbourhoods, and it emerged that Ivanka Trump has been forced to sell clothing under a pseudonym following her father's election as US president.

MIT Media Lab founder Nicholas Negroponte claimed that "biotechnology is the new digital" at MIT's Being Material conference, and Dezeen reported on the tech university's most impressive buildings.

Elsewhere in the US, Philip Johnson's first residential project was put on sale for $1 million and the Frank Lloyd Wright architecture school got a rebrand.

In the UK, London major Sadiq Khan pulled the plug on the Thomas Heatherwick-designed Garden Bridge, citing the potential for spiralling costs.

An affordable housing model for London was proposed by British studio OMMX and house-builder Naked House, after a report revealed that overseas investors are exacerbating the city's housing crisis.

IKEA responded to Balenciaga's £1,705 counterpart of its iconic Frakta bag with a tongue-in-cheek guide to help customers spot the difference and Muji unveiled its design for a tiny prefabricated cabin, which will go on sale for £21,000 later this year.

A new collectible design fair located inside Karl Lagerfeld's historic Monte Carlo villa also opened to the public, and it was announced that Brooklyn's former Domino Sugar Factory will open as a public park in 2018.

In the aftermath of Milan design week, Dezeen reported on the rise of so-called millennial pink in the furniture design industry and rounded up the top 10 examples of the trend. 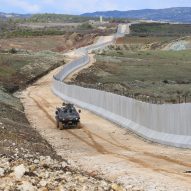