Chinese president Xi Jinping has revealed plans for the world's largest-sprawling infrastructure project – the Belt and Road – which aims to develop trade links between China, Central Asia, Europe and Africa.

Billed as the contemporary equivalent to the ancient Silk Road trade routes that once spanned Eurasia, the vast multi-billion-dollar building project would see over 60 countries linked by road, railway and sea.

President Xi presented the globalisation plan, which seeks to stimulate economic growth in the region by creating free trade areas between countries, during a two-day summit in Beijing earlier this month.

"The glory of the ancient Silk Road shows that geographical dispersion is not insurmountable," Xi told delegates at the summit, according to The Guardian newspaper.

"This part of history shows that civilisation thrives with openness and that nations prosper from exchange."

Described as the world's biggest infrastructure project, China is estimated to be investing £115 billion ($150 billion) each year in the Belt and Road scheme, with £692 billion ($900 billion) already spent.

The project involves a sea route linking China's southern coast to east Africa and the Mediterranean – confusingly referred to as the "road" – and a road and rail network connecting the country to Europe through Central Asia and the Middle East, making up the "belt".

China has already invested in multiple international infrastructure projects that will contribute to the Belt and Road scheme, which it originally outlined in 2013.

While The Guardian suggests there are "plans for pipelines and a port in Pakistan, bridges in Bangladesh and railways to Russia".

India notably boycotted the event, claiming the works would burden countries with debt and environmental damage.

Governments in Sri Lanka and Myanmar are also reportedly seeking to renege on Belt and Road projects. 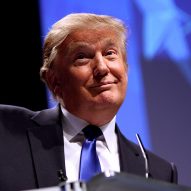 While China's infrastructure scheme aims to connect countries to develop trade links, one of the most notable infrastructure projects of late from American president Donald Trump aims to sever the link between the USA and Mexico.

The US Department of Homeland Security, Customs and Border Protection recently tendered for a highly controversial 30-foot-tall wall to be built between the two countries.

Photograph courtesy of The Russian Presidential Press and Information Office.