Dezeen has teamed up with Tokyobike and Ally Capellino to give one reader a limited-edition bike and a rucksack.

This competition is now closed. Congratulations to the winners, which is Vera Geraldes from London, UK.

The winner will receive the medium-sized white version of Tokyobike's CS 650 Limited bicycle – a luxury edition of the brand's Classic Sport model.

The eight-speed bike features a Brooks England leather handlebar and saddle, as well as fast, 650C wheels. The standard retail price is £720.

Winners will also receive a backpack from Tokyobike's collaboration with accessories designer Ally Capellino, which is specially designed for cycling in the city.

The bag is a version of the brand's signature Frances style with cycling-friendly features. It has a proofed nylon exterior, a reflective strip, and a loop for a cycle light.

It also has a padded back for comfort and a padded pocket inside to keep a 13-inch laptop or other smart devices safe whilst riding. The winner can choose either the bright orange or navy blue version of the bag, which usually retails for £145.

The winner of the competition must be able to collect the bicycle from Tokyobike's London store, 87-89 Tabernacle Street, EC2A 4BA. The bag can be shipped to the winner or also collected in person.

Tokyobike is an independent bicycle company that was founded in the Tokyo suburb of Yanaka. Focusing on lightweight and comfortable design, it produces bikes intended for cities.

The brand first teamed up with Ally Capellino in 2016, which saw the debut of their cycling-conscious backpack range. 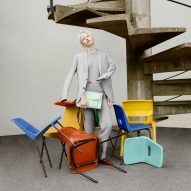