Juicero, the company behind the Yves Behar-designed juicer that was famously the subject of a social media backlash earlier this year, has announced it is shutting down.

Silicon Valley-based Juicero announced on Friday it was halting manufacture and suspending sale of the $400 (£308) juicer and its accompanying produce sachets. It is offering refunds to all customers, dating back to when the machine went on sale 16 months ago.

In a statement posted on the Juicero website, the company said it had tried to find a cheaper supply chain and distribution model that would allow it to lower the price of its products, but had not been successful.

"In order to fulfil our mission, we announced last month that we would shift our resources to focus on lowering the price of the press and produce packs," the company said. "We began identifying ways that we could source, manufacture and distribute at a lower cost to consumers."

"During this process, it became clear that creating an effective manufacturing and distribution system for a nationwide customer base requires infrastructure that we cannot achieve on our own as a standalone business. We are confident that to truly have the long-term impact we want to make, we need to focus on finding an acquirer with an existing national fresh-food supply chain who can carry forward the Juicero mission."

The company now said it would seek a buyer with an existing US fresh food supply chain "who can carry forward the Juicero mission".

The Juicero juicer had initially gone on sale for $700 (£550) in 2016 before being discounted several times. It became the subject of ridicule on social media in April after it transpired that a pair of hands could do the same job as the machine, which squeezes juice from pre-packaged sachets of fruits and vegetables.

Behar's studio Fuseproject had worked with Juicero for two years to design the Nespresso-style countertop machine. The involvement of Behar – who is one of the world's leading industrial designers for new technologies – is thought to be one of the reasons for the Juicero's high price tag.

Among its features is a door made of aircraft-grade aluminium. It is also Wi-Fi-enabled, for the purpose of rejecting out-of-date bags of juice based on scans of their QR codes, and was said to deliver 8,000 pounds of force to its produce packets.

Bloomberg Business made a video showing that human hands were as effective as Juicero at squeezing juice from a packet, causing a social media storm

Following the internet backlash, Behar had defended Juicero to Dezeen, saying that it was a useful product.

The machine came to the attention of Twitter users following the publication of a Bloomberg Business article in April that said investors had been dismayed at the final product. It included a video showing its juice packets being squeezed by hand.

After that, to be "the Juicero of" something became a descriptor for other expensive gadgets of limited use – similar to how "the Uber of" is used as a shorthand for on-demand, app-based businesses.

However, the year has also brought the closure of the technology company he is perhaps most associated with – Jawbone fitness trackers – which went into liquidation in July.

Behar was placed 26th among designers on Dezeen Hot List, a data-based power ranking of the most influential names in architecture and design. 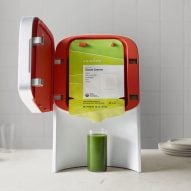