As high rents continue to drive artists out of London, the UK's seaside towns are set to become the creative hubs of the country, according to British artist Bob and Roberta Smith.

Bob and Roberta Smith – the pseudonym used by artist Patrick Brill – said that the increasing cost of living in the capital will benefit cities in the north of England, and will also have a huge impact on seaside towns across the country.

"The north is going to become an incredible centre for art, and all these seaside towns are as well, because they are underused as a facility and they are amazing places to be," he told Dezeen.

The artist is one of the participants of this year's Folkestone Triennial, an art festival that takes place in an old port town in Kent. He claimed that Folkestone, and other British seaside towns, will transform in the same way Brooklyn did when Manhattan rents rose.

"It would be a much better life living down in Folkestone, and when that happens all these places will become like Brooklyn, and that's a good thing, it brings jobs in other ways as well," he said.

Artists are already moving out of London

A number of high-profile artists have already swapped London for towns on the British coastline. For instance, last year Tracey Emin announced she was moving her studio to the Kent coast.

Bob and Roberta Smith has set up his own studio Ramsgate, also on Kent's coast, to make the most of cheaper rents. However he splits his time with London, where he as an associate professor at London Metropolitan University.

Locals in these towns often describe the former city dwellers using the derogatory phrase Down From London (DFL).

But Bob and Roberta Smith argues that this influx of new people into other parts of the UK is no bad thing, as a steady draw away from the capital will help to foster new creative scenes, which in turn will boost local economies.

"It's not that I'm advocating second homes but I do think these towns benefit from growth and aspiration."

Several English seaside towns are already hotspots for creative activity, thanks to events like the Folkestone Triennial. Established in 2008, the art exhibition has seen a number of international artists contribute, and the 2014 event attracted a total of 135,000 visitors.

Tourists are also being lured by a series of new art galleries on the seafront, including the David Chippefield-designed Turner Contemporary in Margate, the Jerwood Gallery in Hastings and the newly extended Tate St Ives in Cornwall.

Bob and Roberta Smith's contribution to this Folkestone Triennale is an installation called Folkestone is an Art School, designed to show how the town could cater to the arts, by building a new art school.

He hopes the installation will also drum up more support for arts education, which he says is  "not being taken so seriously".

His concern, that "art just disappears", follows the introduction of the English Baccalaureate (EBacc) in UK secondary schools, which places a stronger focus on English, Mathematics, sciences, foreign languages, history and geography, rather than on creative subjects. The change was recently reported to have caused a significant decline in exam entries for arts subjects.

"One of the things we need in this country is a child art movement again," he said. "We need groups of people to think about how exciting it is to get people engaged in the arts, not because people with good GCSEs then become David Shrigley, or Bob Roberta Smith or Tracey Emin, but because it is good for democracy." 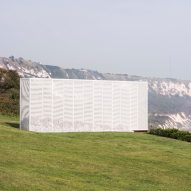 10 installations to check out at Folkestone Triennial 2017

Bob and Roberta Smith is one 19 artists who have contributed to this year's Folkestone Triennial, which continues until 2 November 2017.

Others include David Shrigley, who has recreated one of the town's Victorian-era street lights from memory, and Richard Woods, who has built cartoon bungalows as a comment on the housing crisis.

Read an edited version of the interview with Bob and Roberta Smith:

Eleanor Gibson: Tell me about your project.

Bob and Roberta Smith: What we're doing is asking the town to teach itself art essentially in that project. So I'm declaring the town an artwork essentially in a conceptual sense. Essentially, we're saying it's a challenge to Folkestone Triennial, it's a challenge to the whole city culture and to all of these kind of projects to say: "Well can you enact it? Can you get something out of it? If you put all of this infrastructure into a town, or if you put all of this activity into a town, what are the ripples really about?"

So basically we're inviting artists in the town to become a faculty and then they will teach the next generation. That's the nuts and bolts of the project.

Eleanor Gibson: How does it relate to the theme of this year's triennial, Double Edge?

Bob and Roberta Smith: I think the idea of the Double Edge is quite funny because you have one group, that's one edge, which is the experienced artists of this town. And then you've got the other, which is the vanguard kids who are going to be mainly 17 to 23 year olds, who will be our main cohort of students. So it's really putting those two things together and saying, if cultural regeneration or activity works in this situation, surely we can challenge the next generation to make art? So it's about that really.

Eleanor Gibson: We recently published a report on the alarming drop of students taking art and design at GCSE. Why do you think this is?

Bob and Roberta Smith: It's a multitude of things, one is the collapse in the political belief behind the arts, principally because of the redesign of the subject offer, which is called the EBacc. Without being too technical, it means that a headteacher has to be very very pro-arts for there to be an art department in your school.

So there will be some schools that become really quite good because they've been given new freedoms by government initiatives, but the other schools, mainly in the difficult areas, art just disappears. That's had a knock on effect in primary education, arts not being taken so seriously.

One of the things we need in this country is a child art movement again. We need groups of people to think about how exciting it is to get people engaged in the arts, not because people with good GCSEs then become David Shrigley, or Bob Roberta Smith or Tracey Emin, but because it is good for democracy. You need people to feel confident to be able to speak and you can only learn to speak or be taught to speak really. You know you've got to be able to sing and write and perform for your voice to get out there. So it's really about democracy.

Eleanor Gibson: Why do you think it important for initiatives like Folkestone Triennial to promote arts outside of London? For example, Richards Woods pieces is making a statement about holiday homes in these places...

Bob and Roberta Smith: I don't agree with Richard actually, partly because I am a classic DFL. I live in London but my studio is in Ramsgate. And actually the way Ramsgate is transforming is great. Because small industries used to be located outside of London and people weren't flying off on holiday. That receded, and all these incredible Victorian buildings started crumbling and the infrastructure fell apart. And that's a more complex issue then saying it's terrible that second-home owners are moving down.

My daughter is in London and she's never going to own a house in London, never ever. But she could later on move down here. It would be a much better life living in down in Folkestone, and when that happens all these places will become like Brooklyn and that's a good thing. It brings jobs in other ways as well.

Eleanor Gibson: So could there be a benefit to more people having second homes?

Bob and Roberta Smith: No I don't think that necessarily, but I think certainly London is one of the hubs. The only thing that will happen when London becomes unaffordable is the north is going to become an incredible centre for art, but also all these seaside towns are as well, because they are underused as a facility and they are amazing places to be.

So it's that sort of thing. It's not that I'm advocating second homes but I do think these towns benefit from growth and aspiration.

Eleanor Gibson: Another edge to whole the Triennial is the EU Referendum and Kent's vote to leave, did this affect your piece at all?

Bob and Roberta Smith: I made film in Ramsgate advocating that we stay in the EU. I took a painting saying we've only got each other and went into the channel, and we made a film about that. I think that EU referendum thing – people were lied to essentially and we're dealing with the aftermath of it now. Brexit is completely undeliverable and it will never happen in the shape and form that Brexiteers really want it to happen. What will happen, I think, is we will slip into the sludge of some sort of crazy idea. We are in Europe, it's inescapable, unfortunately, or fortunately as I think.

Eleanor Gibson: Do you think that Brexit will affect the arts?

Bob and Roberta Smith: I spent most of my career travelling around doing exhibitions, mostly in northern Europe and in Italy, and I don't want barriers to that to happen for me or for artists coming into the UK. There are too many barriers like that.

I teach in a university a couple of days a week. The government's idea, the Home Office's view on overseas students is just destroying British universities, because it's all based upon trying to get overseas students in to cope with the fact that the fees will never be, the loans system is a joke so that's a mess. I do worry about it but I also think that people are people, and this is a moment, where art and humanity are bigger than one boat. It's not the world.