The installation, which forms part of the Folkestone Triennial, consists of a series of colourful bungalows installed in unusual locations, including on the beach and on a floating platform in the harbour.

Woods hopes the installation will highlight a big contributor to the housing crisis – that many people in the UK have more than one home, some as many as 10, while others have nowhere to live.

He came up with the idea during an earlier visit to the Kent town, when he was handed a flyer that revealed how many residences were being transformed into holiday rental properties.

"The paper was a flyer from an estate agent asking me if I wanted to sell my house, as top prices were being paid by people moving into the area that wanted a holiday home," explained the London-based artist.

"The idea of local residents being asked to sell up their houses led me to start thinking about the broader issues of home ownership, about where would be a great place to have a holiday home in Folkestone and where wouldn't," he said. "It also led me to think about the ideas of multiple-home ownership."

Woods used his trademark cartoon style – previously seen on projects like his furniture for Established & Sons, as well as in his own home – to create a design for a house that combines neon colours with thick black outlines.

Each house has its own colour but all six share the same form, designed to look like traditional British bungalows. However, each one is about the third of the size of a standard house.

As well as the houses on the beach and on the harbour, which feature shades of red and pale pink, there is also a blue house raised up on a brick structure and a yellow house built on grass. The set is completed by houses in fuchsia and orange.

The Folkestone Triennial 2017 will be open from 2 September to 5 November 2017, and will also feature the work of artists including Antony Gormley, David Shrigley and Michael Craig-Martin.

The last edition of the arts event, which took place in 2014, featured a farm disguised as a fish and chip shop by Something & Son, a lighthouse/beach hut hybrid by Pablo Bronstein and a bamboo lattice by Gabriel Lester. 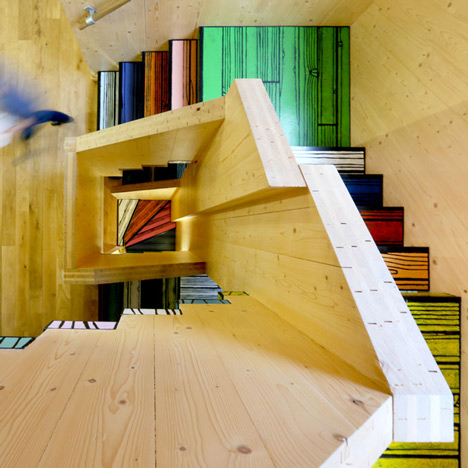