London-based illustrator Rob Flowers has created a series of edible posters for an exhibition aimed at encouraging children to experiment with their food.

Six winners were selected to have their imaginative foods realised by Bompas & Parr and the results were presented at a one-day exhibition at London's V&A Museum of Childhood on 14 October 2017.

Illustrator Flowers was brought on board to create a series of brightly coloured exhibition posters and tickets for the event, which were made using edible paper and flavoured ink.

The six posters – inspired by the winning food fantasies – star a medley of cartoon fruit and vegetable characters, including a flatulent broccoli and a windswept parsnip. Each illustration also comes with its own personalised tagline.

Air compressors were used to spray food colouring onto edible sheets of mango flavoured frosting paper, which were then mounted onto a thick block of white chocolate that had been allowed to set for 24 hours before being eaten by the children.

"We used a New improved formula for edible ink, allowing us to print any colour and flavour we wanted," Bompas & Parr told Dezeen.

According to advertising agency AMV BBDO, which hosted the exhibition, only eight per cent of children in the UK eat their recommended five-a-day fruit and vegetables.

They hoped the exhibition would help to make food experimentation, particularly with healthy ingredients, seem more fun for children.

"As a result, trying new foods can be an intense, and sometimes unpleasant experience. But through play and experimentation, children are more likely to try different foods and accept them," they continued.

Bompas & Parr was founded in 2007 by Sam Bompas and Harry Parr, and initially attracted attention for its jelly moulds of famous buildings.

The studio has since focused on experimental food design and immersive experiences for brands, such as a glow-in-the-dark ice cream for Cornetto and a machine that enhances the flavour of whiskey. 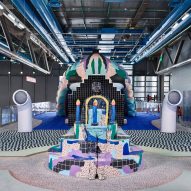