Transportation Alternatives deputy director Caroline Samponaro said the fatal incident, when a motorist drove onto the popular Hudson River Greenway and knocked down 18 people, could have been prevented if the route was properly safeguarded from traffic.

The driver of the vehicle was heading south along the West Side Highway towards the World Trade Center when he diverted onto the popular bike lane.

Samponaro has blamed the lack of bollards between the road and the cycle paths at crossing points for preventing the vehicle's trajectory.

"Tuesday's attack underscored that it should be the norm – not the exception – that we provide better protection for New York City's bike lanes, pedestrian plazas and most crowded sidewalks," she told Dezeen.

Samponaro added that the city – which is commonly traversed on foot or bike – should focus on managing the movement of large vehicles.

She suggested limiting their access to night time, when fewer pedestrians are about, or copying a model used in some parts of Europe that completely bars them from popular public spaces.

"In addition to installing bollards, granite blocks and other proven countermeasures to protect bikers and walkers, the city must do a better job of monitoring and managing car and truck traffic," said Samponaro, whose organisation advocates for safer transport in New York.

"More widely, the City of New York should begin regulating and limiting truck and vehicle access to our city's most crowded areas the same way that many European cities do for both safety, security and street efficiency rationales."

The incident on 31 October 2017 follows a string of similar events in Europe, when terrorists deliberately drove onto sidewalks, pedestrian routes and public spaces. These included La Rambla in Barcelona this August, and a pair of vehicle-based attacks that took place on London Bridge and Westminster Bridge, to which the UK capital responded by installing heavy barriers to separate cars and pedestrians.

The Promenade des Anglais in Nice, the site of the 2016 Bastille Day attack when 86 people were killed by a truck, is now protected by bollards linked by steel cables. 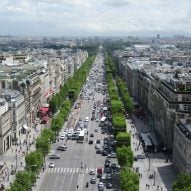 As well as typical barriers, the recent attacks in European city's have prompted investigation into other solutions that could be implemented in urban areas to protect pedestrians in the future.

Italian architect Stefano Boeri has proposed using trees and planters as blockades instead, a move that Florence's mayor Dario Nardella plans to realise in the city.