We're heading to Pennsylvania for the next in our series of roundups featuring homes from each US state, where projects vary from an all-white farmhouse to a residence cantilevered over a factory.

Double-height rolling shutters can open up or enclose this pitched-roof farmhouse, which Cutler Anderson Architects designed for a rural property.

The shutters allow the southern facade's expansive windows to be shaded while still letting a small amount of light through their slats.

Find out more about Pennsylvania Farmhouse ›

Self-taught designer Tom Givone extended a white house with a warped metal-clad addition that starkly contrasts with the traditional architecture.

Originally built in the 1850s, the Twisted Farmhouse's two-storey extension is wrapped in a silvery exterior, designed around five curving columns that create its shape.

Find out more about Twisted Farmhouse ›

American firm Interface Studio Architects built an all-white townhouse in a gentrifying part of Philadelphia, with a plywood staircase running up its middle.

Built between two other townhouses as part of a row, the narrow home's white exterior makes it stand out from the older buildings in the area, which are covered in either vinyl siding or red brickwork.

Find out more about Outside-In House ›

For summer residents studying at Fallingwater – the famed 1930s home designed by Frank Lloyd Wright – US firm Bohlin Cywinski Jackson created a set of cabins on a historic farm.

The shelters enable the institute to accommodate more students and form an extension to a cabin dating to the 1960s.

This house in Pittsburgh by American architect Eric Fisher cantilevers by 16 metres to hover over the roof of a glass factory.

Designed to house the owners of the factory, the Emerald Glass House features Corten steel, mesh and exposed steel columns to create an industrial aesthetic. 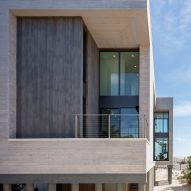 Five of the best houses in New Jersey on Dezeen