US supermarket giant Walmart has filed a patent to create a system of drones that can help customers with price verification and locate products in the store.

The patent, which was published on 22 March 2018, but filed on 19 September 2017, details methods to assist shoppers using unmanned aerial vehicles (UAV).

In the system outlined, customers would be able to summon assistance from a mobile electronic device. The request would be logged on a centralised computer system, which would then send a drone to locate the customer in need to advise on prices and the whereabouts of products.

The patent text describes how drones could provide the accurate product costs by delivering instructions from the central computer or scanning barcodes to crosscheck information stored on databases.

To help locate products the drone could either act as a guide, leading a customer to a product, or provide a visual map showing the items location in store.

The drones would be fitted with sensors to prevent collisions with other drones, objects in store and customers.

The patent also suggests that the UAVs could be fitted with "drone assistant modules" including play screens, and speakers to help with other issues.

The descriptions of the UAVs are similar to those found in Walmart's recent application to patent a technology that would see drones used to pollinate crops like bees, for spraying pesticides and monitoring crop conditions.

Filed earlier this month, this application describes drones that would be controlled by a computer but use cameras and sensors to find the locations of crops.

Along with shopping assistant drone, Walmart has filed a suite of patents to implement in store technologies to streamline processes and improve customer experience. 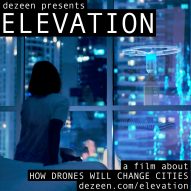 Among the proposals is a wearable device that will be presented to shoppers on arrival at a Walmart and used to track them throughout.

Another patent outlines plans to fit shopping trolleys with a "sensing device" to gather information on its contents, as well as its location in store. As with the drones, the smart carts will be linked with mobile electronic devices, such as phones or applicances presented on arrival, to navigate products in store.

The supermarket has also investigated ways to ensure its shelves are adequately stocked, with methods including cameras that monitor stock levels and electrical transmitters to detect whether there was stock on the shelf.

Future of the shopping experience

Walmart's patents forecast the future of the shopping experience, keeping it up to speed with one of its major competitors Amazon. The online retailer opened Amazon Go earlier this year – an app-enabled store where shoppers can simply walk out with their groceries.

Amazon has also developed a host of futuristic proposals, including a patent for the Wristband Haptic Feedback System, a wristband that can monitor the hand movements of its warehouse employees and direct them to items using small vibrations.

Last year, the company moved to patent a series of underwater warehouses, while in 2016, it filed documents for warehouses carried by airships.

Walmart is among many companies exploring the use of drones. Dezeen's forthcoming documentary ELEVATION explores how UAVs will change the way people and goods travel and impact how architecture is designed and built.