Japanese studio Nendo explored the relationship between people and objects with its Milan design week exhibition, which featured unconventionally shaped hourglasses, flexible container lids and alternatives to the traditional zipper.

The Forms of Movement exhibition sought to question whether everyday objects can convey motion.

Presented in Milan's Tortona district as part of the Superstudio venue, it showcased 10 designs that deal with the concept of movement.

"Movement is an inseparable part of our being; we move our bodies, we move objects, and there are objects that move independently around us," said Nendo, which is led by designer Oki Sato.

The exhibition comprised a series of black and white rooms, featuring meditative music.

One of the first exhibits is the Zippppper project, which saw Nendo develop five alternatives to the standard zipper for fastening manufacturer YKK.  For the exhibition, large projections of these zippers were presented against a black backdrop.

"The theme is about movement and the starting point was a single zipper," Nendo founder Oki Sato told Dezeen. "We were commissioned by YKK to design a zipper for them. They were expecting new colours and finishes, but we wanted to redesign the zipper itself." 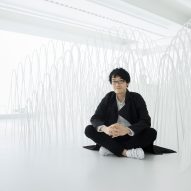 "After that project, I noticed that we were not trying to design the object itself but we were more interested in the movements that connect people," he explained.

All of the other objects Nendo showed were also collaborations with Japanese manufacturers, experimenting with new materials and techniques.

Among them was Variations of Time, which featured four unusually shaped hourglasses, made from blocks of transparent acrylic. Designed to "change the perception of the flow of time", the hourglasses feature different sized cavities and passages that alter the speed and the angle of the flow of the sand.

These pieces was presented on a black podium and illuminated in white light.

Elsewhere, the Air Lids – a series of kitchenware lids designed for air conditioning manufacturer Daikin – were exhibited on individual stations, with enlarged projections positioned above. These lids were designed to imitate hand movements like pinching and pushing.

Other objects included a torch rolled from a single sheet of paper, clay spheres that morph into tiles, and shades that change in reaction to people and light.

"These objects and various others presented, embody movement in their shape and function while incorporating advanced technologies, state-of-the-art mechanisms and unconventional materials," said Sato.

Nendo was the second-highest ranking designer on Dezeen Hot List 2017. Founded in 2002, it has offices in Tokyo and Milan, and has worked on an unusually wide range of projects, from furniture to accessories and stationery.

The studio is a regular exhibitor at Milan design week and often creates large-scale exhibitions. Last year saw it create a white sanctuary that housed a cut-out mountainscape and wobbly jellyfish vases, while previously it filled a courtyard with experimental chairs.

"I find something interesting and I just try to share it with other people – that way of designing hasn't changed for me since day one," said Sato.

"Sometimes a theme becomes a toilet or a cheesecake, but it's always about being interested in the small and boring things, and creating something interesting."

Forms of Movement was on show for Milan design week from 17 to 22 April 2018. Other exhibitions that took place across the city included a house 3D printed in concrete by a portable robot and a showcase of colourful capsule homes.